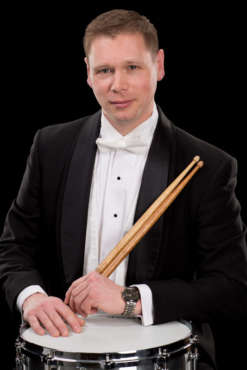 Steve Owen is a percussionist, timpanist and drum set artist with The President’s Own United States Marine Band in Washington, DC. His work with the band has included innumerable concerts, tours, recording sessions, and high profile ceremonial commitments throughout the National Capital region and across the United States. Dr. Owen’s highly diverse skills have been displayed in several appearances as a concerto soloist with the band on works including déjà vu by Michael Colgrass, Concerto for Marimba and Band by David Maslanka, and Riffs for drum set and band by Jeff Tyzik. A frequent contributor to the band’s chamber music series, Dr. Owen has performed as a soloist on Reflections on the Nature of Water by Jacob Druckman, Marimba Spiritual by Minoru Miki, and Mudra by Bob Becker. In addition, he composed an original work for solo timpanist and percussion ensemble entitled The Four Humors, which has been featured on the Marine Band Chamber Series, the University of Maryland Day of Percussion, The Arkansas Day of Percussion, and at the University Of Oregon School Of Music. His drum set skills have been in high demand, resulting in regular performances with the jazz combo section at the White House over three different administrations, the home of the Commandant of the Marine Corps, the residence of the Chairman of the Joint Chiefs, the State Department, as well as a week-long residency at the Juneau Jazz and Classics Festival in Juneau, Alaska.

Dr. Owen leads an active freelance career, having performed with the Oregon Bach Festival Orchestra, Eugene Symphony, The Opera Theater of Rochester, and the Rochester Philharmonic Orchestra, with which he appeared on two CD recordings and at the Vail Bravo! Music Festival in Vail, Colorado. Locally, he has appeared as a timpanist and percussionist with the Annapolis Symphony Orchestra, The Maryland Symphony Orchestra, The National Philharmonic Orchestra, and the Alexandria Symphony. He also appears as a drum set artist is numerous venues around the DC, Maryland and Northern Virginia area. Prior to moving to Washington, he was the drummer for the Don Latarski trio, and for the CD Building a Monastery for singer/songwriter Doug Mattingly in Baltimore, Maryland.

Dr. Owen is an active educator, having given countless clinics and masterclasses around the country as part of his concert tours with the Marine Band. Additionally, he served as a founding member of the artistic staff of The Capital Symphonic Youth Orchestras, a post he held for 5 years. He has presented clinics at the Armed Forces School of Music, as well as two Percussive Arts Society International Conventions on topics ranging from orchestral percussion to chamber music and performance practice.

Dr. Owen received his Bachelor’s Degree in Percussion Performance from the University of Oregon. He went on to earn his Master’s Degree and Doctorate, as well as the coveted Performer’s Certificate, from The Eastman School of Music. While at Eastman, he was the recipient of a Graduate Assistantship, and served as the Director of the Eastman Chamber Percussion Ensemble. In the 1997-98 academic year, he premiered the wind ensemble transcription of Joseph Schwanter’s Concerto for Percussion, which he performed on the 1998 Eastman Wind Ensemble Japan Tour culminating in a nationally televised performance of the work on the NHK television network from Tokyo.