The Performing Arts Series at Shepherd 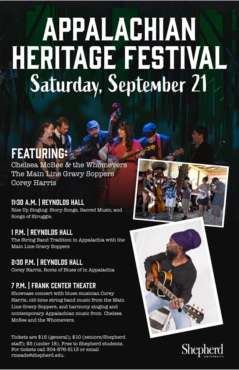 Musicians performing during the festival and at the Showcase Concert on Saturday, September 21, include Chelsea McBee and the Whomevers, Corey Harris, and The Main Line Gravy Soppers.Shepherdstown native McBee performs old-time West Virginia banjo tunes, as well as vocal harmonies with her mother, TeresaMcBee, and sister, Melody Massimino.

McBee has been performing and writing since 2006. While there are many artists and styles of music that have influenced McBee, the beauty and history of Appalachia remains the strongest.

Corey Harris, a blues guitarist, vocalist, songwriter and band leader, has recorded many old songs from the blues tradition, while also creating an original vision of the blues by adding influences from reggae, soul, rock, and West African music. In 2003, Harris was a featured artist and narrator of the Martin Scorcese film “Feel Like Going Home,” which traced the evolution of blues from West Africa to the southern U.S. In 2007, he was awarded a $500,000 MacArthur Fellowship from the John D. and Catherine T. MacArthur Foundation. The annual grant described Harris as an artist who “forges an adventurous path marked by deliberate eclecticism.”