Our second annual Showcase for Scholarships was a huge success! We exceeded our goal of funds raised for music scholarships! Thank you to everyone who came out to support Music at Shepherd!

About the White House Band 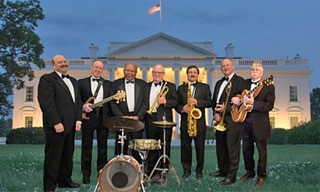 The White House Band is a group of some of the finest musicians in the world who at some point in their careers played at the White House with our nation’s Washington-based military bands. The group performs music ranging from rock and swing, to latin and jazz. The members of the band represent all of the armed services and have worked together and in separate groups for the better part of thirty years. They have been a featured group with The National Symphony Orchestra, played at Wolftrap, The Millenium Stage, Strathmore Hall, and Blues Alleyin Georgetown.  The White House Band is led by trumpeter Dave Detwiler (former lead and solo trumpet with The US Army Band) who currently plays with the National Symphony Orchestra at the Kennedy Center. With Chris Vadala on saxophone (played sax with Chuck Mangione for 14 years) and Rhoades Whitehill on trombone (formerly with the U.S. Navy Commodores) this front line of horns has played with just about every artist in the business ranging from Sinatra and Streisand to Cee Lo Green and Lady Antebellum.  The rhythm section of Ronnie Shaw(Shepherd drumset professor and member of Three Mo’ Tenors) on drums, Glenn Dewey (professor of bass at George Mason University and bassist with the U.S. Marine Band’s present White House band) Ken Hall, (professor of guitar at Shenandoah University and NOVA and department head at Westfield High School) and Dr. Mark Cook on keyboards (Shepherd University), are exceptional soloists, as well as one of the finest rhythm sections ever assembled in one band. The March concert will also feature vocalists, Dr. Darden Purcell and Glenn Scimonelli.

Many thanks to our Musical Showcase for Scholarships Host Committee and Sponsors.