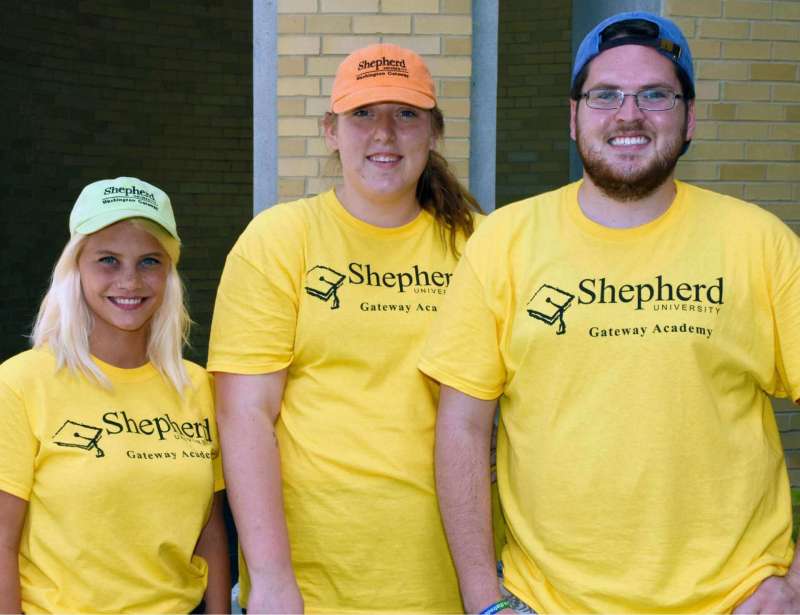 Three of the six counselors at Shepherd’s Washington Gateway Academy are graduates of the program. Pictured (l. to r.) are Nycole Cooper, a social work major from Romney; Haley George, a 2017 Shepherd graduate from Bunker Hill; and Kahlen Browning, a business major from Bolt. The Gateway Academy offers a weeklong, on-campus experience to rising ninth graders from West Virginia, Virginia, and Maryland to give them an idea of what attending college might be like.

The 27th annual Shepherd University Washington Gateway Academy took place in July, giving 28 rising ninth grade students from West Virginia, Maryland, and Virginia the opportunity to spend a week on campus getting an idea of what college might be like. Six college-age counselors, including three who are graduates of the program, served as mentors to academy participants.

Current Shepherd students Kahlen Browning and Nycole Cooper and graduate Haley George all attended the Gateway Academy as middle school students and worked as counselors this year. They agree that participating in the Academy was a defining event in their lives that they hope to pass along to the current group of participants.

“It was just a whole new world,” said Cooper, who was in foster care and attending middle school in Romney when she attended Gateway in 2009. “I remember so much because it was my first time seeing college classrooms, laboratories, the dorms, and going to Washington, D.C. Gateway really did show me that there is so much more and that there’s a bigger world.”

Browning, who attended Gateway in 2008, grew up in Bolt, a tiny town in Raleigh County.

“Coming from a very small town, it kind of blew my mind at first,” Browning said. “You think Shepherdstown is the biggest place you’ve ever seen and then they take you to D.C.”

Browning said participating in Gateway convinced him he could achieve far more than he ever imagined.

“I never had been a straight A student and never will be,” Browning said. “But the Gateway Academy showed me that you don’t need to be as long as you’re dedicated and you know what you want to do, you can do it. It just takes extra work.”

Coming to Gateway as a middle school student influenced Browning to go to college and he said working as a counselor at the Academy is influencing what he’d like to do when he graduates. Browning wants to eventually work in leadership for a nonprofit youth organization.

George is a 2007 graduate of the Gateway Academy and a 2017 graduate of Shepherd. Like Browning and Cooper, she is the first in her family to attend college.

“Gateway is special because it takes kids who don’t necessarily believe that they can go to college, who aren’t doing poorly in school but are on the borderline, and shows them the opportunities they have,” George said. “It gives them the kind of push they need to work harder and to reach for what they want.”

George’s goals are to earn a master’s degree, join the Peace Corps, and eventually teach college. She thoroughly enjoyed working as a Gateway counselor.

“You don’t see the results right away when you’re the camper, but when you’re the counselor you get to watch changes happen right in front of you,” George said. “I think it’s amazing to watch the kids grow and know you played a role in that.”

Since 1991, more than 2,150 middle school students have attended Shepherd’s Gateway Academy, which offers classes in science, math, writing, college prep, and social science. It also teaches students study skills and gives them writing practice by keeping daily journals. Field trips, which are planned around the curriculum, give students the opportunity to visit Harpers Ferry and Washington, D.C.

Holly Morgan Frye ’09 M.A., assistant vice president for student affairs, who served as the director of Washington Gateway, said the Academy has been very effective in achieving its primary goal—encouraging students who might not have considered college to attend.

“Gateway is important because of the impact it has on our future leaders,” Frye said. “I had the opportunity to speak to these students, to learn about their goals, and to see their reactions from visiting the Holocaust Museum, the Air and Space Museum, and having direct exposure to the nation’s capitol.

“Academy experiences reinforce confidence and inspire curiosity, both of which help motivate students to pursue a college degree,” Frye added. “Eighty-one percent of past Academy participants attend college after graduating from high school.”

This year the program received financial support from Women Investing in Shepherd (WISH), which gave Gateway a $20,625 grant to conduct the Academy. Additionally, money was raised in support of the academy through a fundraising event to honor Dr. John “Quincy” Adams ’71 and ’73, one of the creators and a longtime director of the program, and the Frada Fine Scholarship Fund, BB&T Trustee, donated $4,000.