A standing room only audience gathered in the auditorium of Erma Ora Byrd Hall to hear John Amos present a talk titled “SkyTruth: Using Satellites, Digital Mapping, and Big Data to Illustrate Environmental Issues” on January 30 as part of the President’s Lecture Series. Amos is founder and president of SkyTruth, a nonprofit organization located in Shepherdstown that uses satellite imagery and remote sensing data to document and monitor man-made impacts on the earth such as oil spills, urban sprawl, and natural gas drilling. During his presentation, Amos highlighted research that several Shepherd students had undertaken during internships with SkyTruth.

Amos discussed how SkyTruth uses tools such as digital mapping and big data to investigate and measure human impact on landscapes and ecosystems and to engage the public on environmental issues. He featured examples of SkyTruth’s work on oil and gas drilling and mountaintop removal coal mining. Amos also discussed the organization’s Global Fishing Watch, a project begun in 2014 in partnership with Oceana and Google that tracks where commercial fishing is taking place around the world.

Amos worked as a geologist in the private sector before founding SkyTruth in 2002. The organization made national headlines after the April 2010 BP Deepwater Horizon oil well explosion in the Gulf of Mexico which killed 11 men and spilled a record amount of oil into the Gulf. SkyTruth partnered with Florida State University to use satellite images to estimate the amount of oil from the damaged well and came up with a total that was much greater than estimates by BP and the federal government. 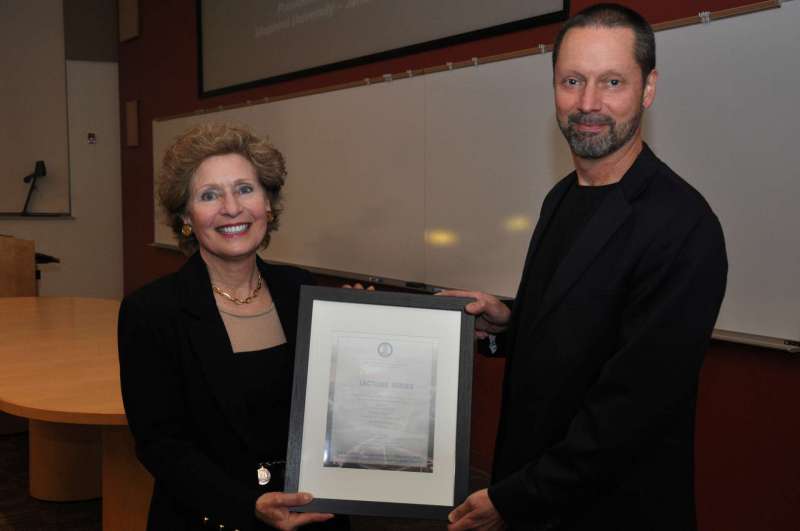 President Mary J.C. Hendrix presents a certificate of appreciation to John Amos at his lecture that was part of the President’s Lecture Series.