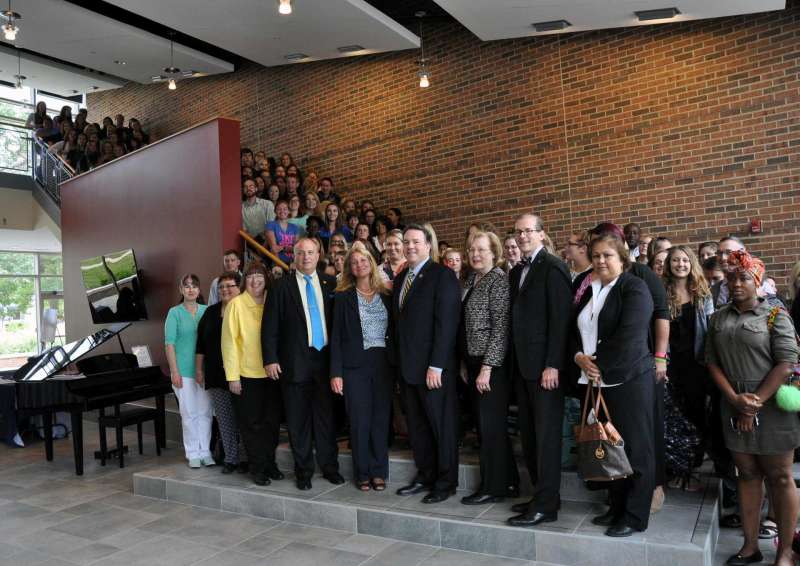 Attendees of the opioid conference, “The Hidden Epidemic of Opioid Abuse in West Virginia’s Eastern Panhandle,” sponsored by the Department of Nursing, assemble in the atrium of Erma Ora Byrd Hall.

The Department of Nursing hosted a conference that explored the region’s growing opioid problem. The conference, titled “The Hidden Epidemic of Opioid Abuse in West Virginia’s Eastern Panhandle,” was held September 16 at Erma Ora Byrd Hall.

The conference, which offered seven continuing education units through the West Virginia Board of Nursing, was part of the Department of Nursing’s commitment to the White House Champions of Change fight to advance prevention, treatment, and recovery of opioid addiction. The conference offered information on the Eastern Panhandle’s addiction problem and ways nurses can begin recognizing aberrant drug use, identifying the risks for abuse of prescribed opioid medications, discussing the nurse’s role in screening, providing a brief intervention, and referring to treatment.

“Nurses have the first contact with patients and can assess the difficulties and the complexities of opioid addiction,” said Dr. Mary Coyle, assistant professor of nursing, who organized the conference. “West Virginia has a very high rate of opioid overdoses related to heroin and prescribed opiates. There’s a real need for nursing students and practicing nurses who are caring for people who have a substance addiction to begin to see a complex picture of the person who is addicted to opiates and ways the family and community are impacted.”