SHEPHERDSTOWN, WV — Shepherd University’s art department is well represented at a juried show titled “INK IT: Contemporary Print Practices” at the Black Rock Center for the Arts in Germantown, Maryland, that runs through March 11.

Rhonda Smith, chair of the Department of Contemporary Art and Theater, and Acadia Kandora, a senior art major from Charles Town, both have pieces in the exhibit. In addition, Smith was awarded Best in Show and will have a one-person exhibit at the center sometime in 2018.

“I was totally surprised that I won,” Smith said. “Truly, there was some exceptional work in this exhibit.”

Helen Frederick, an award-winning Washington, D.C., artist who specializes in large-scale work and printed media, juried the show, which focuses on innovative and surprising methods of printmaking. Frederick chose work by 53 artists who employed both traditional and nontraditional processes.

The print Smith entered in the show is created with a process called intaglio, where the image is etched into the surface of a plate. In Smith’s case, she used a nontraditional material for the plate—acrylic sheeting—on which she created texture by inscribing lines and adding painted or collaged materials to the surface prior to printing. In addition, Smith mounts her prints on boards, which she said is unusual.

“My process is a little different from the traditional intaglio process. My materials are more 21st century,” Smith said. “My print was one that I had done in response to a trip to Venice that was about water, memories, and history.”

Kandora is excited that a piece she produced is included in a show alongside her professor’s work.

“It felt unreal seeing my print on the wall with so many other great pieces,” Kandora said.

The print, titled “Configuring the Colony,” is the result of a new process Kandora’s been developing that incorporates her sculpting, computer, laser cutter, and fabrication skills.

“I’ve been using the laser cutter and some digital fabrication machinery to carve relief plates instead of carving by hand,” Kadora said. “That means I can make really large things in a shorter period of time.”

Kandora likes to find patterns that exist in nature and use them to create new compositions. Her 2 by 4 foot print features the hexagonal pattern of a honeycomb and includes industrial crane-like structures.

This is one of two shows Kandora’s prints appear in this semester. Work by Kandora and Caliph Greene, a senior art major from Winchester, Virginia, were accepted into the competitive Art on Paper 2017 exhibit at the Maryland Federation of Art Circle Gallery in Annapolis, Maryland. That show will run March 30-April 29. 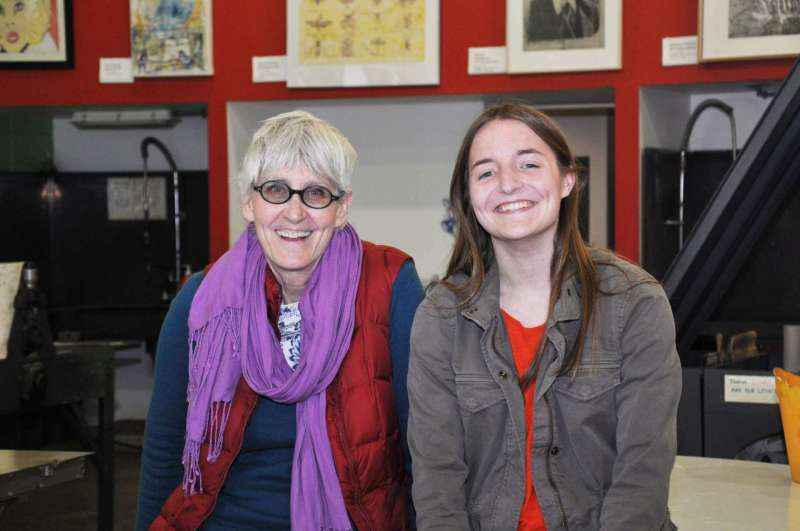 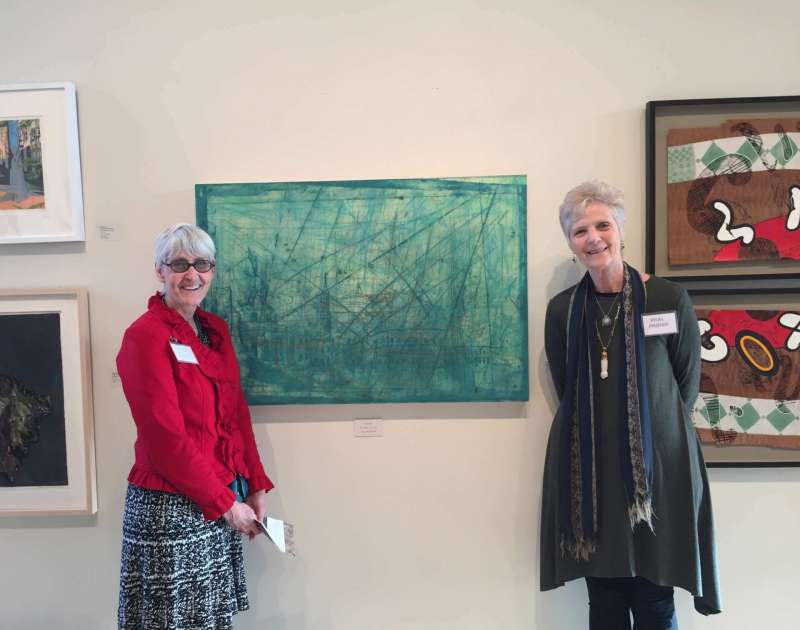