“Kayak football is quite an experience,” said Tracy Seffers, Shepherd’s registrar and TRR chapter coordinator. “If you can imagine the basic rules of football but in kayaks with paddles, it’s very exciting. They do it to engage the competitive energies of our veterans and as a way of extending the therapeutic good of kayaking.”

The kayak football teams have five members who are wounded veterans, active duty service, family members, or other community supporters. The games take place in a space the size of an Olympic swimming pool and combines kayaking skills with those of football, water polo, and hockey. Each half lasts five to ten minutes with a short break in between.

“I’d never played anything like that before,” said Dave Kersey, a TRR volunteer and staff sergeant in the Maryland Army National Guard. “It’s a very interesting game, very physical and strenuous, driving up and down an Olympic size pool for five minutes a half and ten minutes a game.”

While the Shepherd Team Ram Rod members are happy they brought home the coveted trophy, which is a football attached to a Styrofoam pedestal sprayed with gold paint, they say that’s not the most important thing they gain from participating in kayak football.

TRR member and Army veteran Nelson McLaughlin, who plans to transfer to Shepherd next year, came away from the games at Walter Reed with great respect for all who played.

“Growing up I played a lot of sports and I’ve always been competitive by nature,” McLaughlin said. “I’ve won a few championships throughout my life but this one was a little bit different because it wasn’t all about winning, it was about supporting the other people.

“The part about all of it that hit me the most was watching those gentlemen walking around with only one leg or only having one arm and they didn’t look a day over 12,” McLaughlin, who is in his early 30s, said. “To see them get out there and have that opportunity, that was just as important if not more than actually winning the championship.”

“It was really empowering because the people who were playing with prosthetics weren’t letting what happened in the past affect them today,” Buchwitz said. “They were moving forward with their lives as opposed to dwelling on what happened. I basically took away from it that no matter what happens, you can bounce back.”

Team Ram Rod is getting ready for its next challenge—winning the Veterans Kayak Football HOF Challenge August 7 at Willowdale Lake Country Club in North Canton, Ohio, during the Pro Football Hall of Fame weekend. Team Ram Rod will be among eight teams vying for the championship.

Preston Jameson, a Shepherd alumus who volunteers with TRR, is looking forward to playing in the HOF Challenge.

“We play on a big lake and all the people who live on the lake bring their kayaks out,” Jameson said. “Last year pontoon boats eventually showed up and there was a big party on both sides watching the kayak football games.”

Team Ram Rod came in second at last year’s HOF Challenge. This year the team is hoping to bring home the championship trophy. 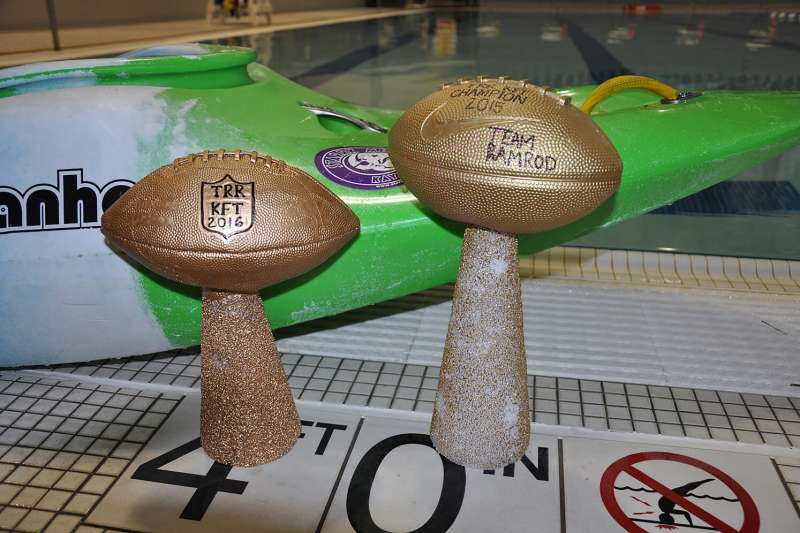