SHEPHERDSTOWN, WV — The Shepherd University Center for Appalachian Studies and Communities is partnering with the Department of Education to sponsor a talk by Twila Smith, an English teacher at Philip Barbour High School, who faced off a teen shooter in her classroom in 2015. The program, titled “A Tale of One Teacher: How 29 Students and Mrs. Smith Survived a Teen Shooter,” will be held Wednesday, January 16, at 2 p.m. in the Erma Ora Byrd Hall auditorium. Her presentation is free and open to the public.

On August 25, 2015, a troubled freshman with a handgun, who felt bullied and his girlfriend insulted, came into Smith’s classroom, disrupting the quiet little town of Philippi and changing the lives of students and the community. The ninth grader had been Smith’s student in another class for just eight days. He came into her classroom, ordered all the students’ cellphones and the teacher’s keys to be thrown in the middle of the floor and the classroom door shut. He told Smith, “You are going to die today,” and she remembers thinking that she believed him.

Smith, a 30-year veteran teacher, knew that if she lost her composure, she and many of her students might indeed lose their lives, so she determined to keep talking and to stay calm. Her story is compelling and serves as a contemporary tale that has become all too frequent in American public schools, but with a positive outcome for both her students and the troubled young man who disrupted her World Studies lesson three years ago.

For more information, contact Dr. Sylvia Bailey Shurbutt, director of the Center for Appalachian Studies and Communities, at sshurbut@shepherd.edu. 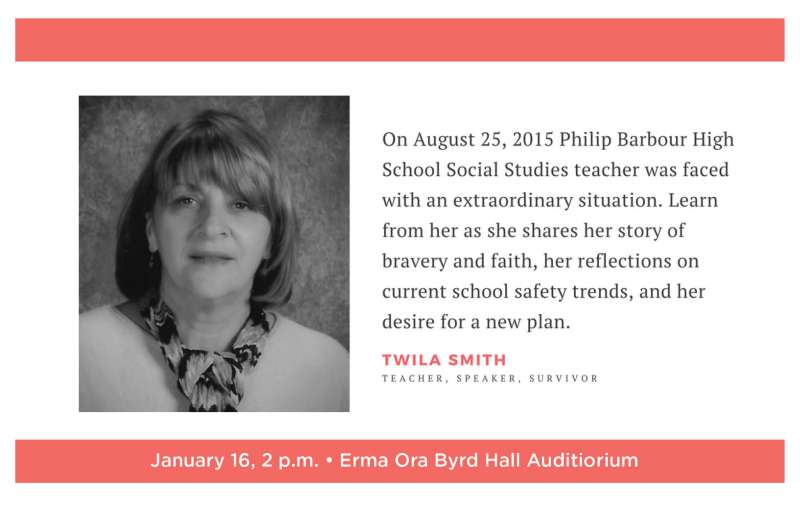