SHEPHERDSTOWN, WV — Shepherd University’s Dinner with Strangers program took on a new twist when Twenty-Third Judicial Circuit Judge Bridget Cohee recently hosted five students in her courtroom at the Berkeley County Judicial Center in Martinsburg. The students spent the morning observing Cohee in court and then joined her for lunch.

“I was more than happy to host the students from Shepherd for ‘Lunch with Strangers,’” said Cohee, who previously served on Shepherd’s Board of Governors. “The students had an opportunity to observe attorneys in court for the Tuesday morning docket with child abuse and neglect and juvenile cases. We had lunch in the jury room and time to discuss their questions. The students were eager and attentive and asked very insightful questions. Shepherd University is truly a gem in the crown of higher education, and the students reflect the positive learning environment when they engage in our community.”

Reaves, who is considering becoming a child advocacy lawyer and guardian ad litem, said she thought Cohee offered a good experience for political science majors like her, who are interested in pursuing careers in law.

“I sat through a criminal preliminary hearing in November, and the atmosphere in Judge Cohee’s courtroom was completely different,” Reeves said. “While some of the child custody and abuse cases that we heard were unfortunate, many of the cases had positive endings, such as permanency for children in foster care. Also, Judge Cohee made the experience much more than I could have ever thought because she explained the process of her courtroom thoroughly, explained terms we may have never heard before, and she is just sincerely a wonderful person to observe. The best part of the day was that Judge Cohee personally interacted with any children who were in the courtroom.”

Jalil said she was excited to watch the judicial process in action and meet “an incredibly talented and experienced judge” who was willing to discuss what inspired her to go into the legal field and who was educational and instructive.

“After talking with Judge Cohee, I gained a new level of respect for those who dedicate their life to service on the bench and the commitment that is demanded,” Jalil said. “It is a unique position unlike another because it requires a brilliant balance between intellectual and emotional strength that I had not previously considered. I was surprised by the court’s collaborative atmosphere that one would not expect when hearing cases regarding sensitive issues with skilled lawyers. The mutually amicable nature of the attorneys demonstrated that this court is truly dedicated to seeing that justice is the priority.”

Jalil said giving students the chance to talk with professionals who are engaged in fields of interest provides opportunities that they would not be exposed to otherwise. Duhaime wanted to participate because she plans to go to law school.

“I wanted to see how a courtroom interacts in an authentic situation, and how all parties react and respond,” Duhaime said. “I learned a lot from Judge Cohee about how she handles the day to day. Watching some of the cases was stressful and heartbreaking, so learning her advice for handling the situations as an aspiring attorney was helpful and offered direct, real-life applications. I also learned courtroom etiquette and about the multiple jobs that exist within a courtroom—like the court reporter.

“I think Dinner with Strangers is an amazing program—especially for students who can meet with people in their career path,” Duhaime added. “Meeting with Judge Cohee and observing her court was so helpful in solidifying my career plans, and I am so happy I was able to have the opportunity.” 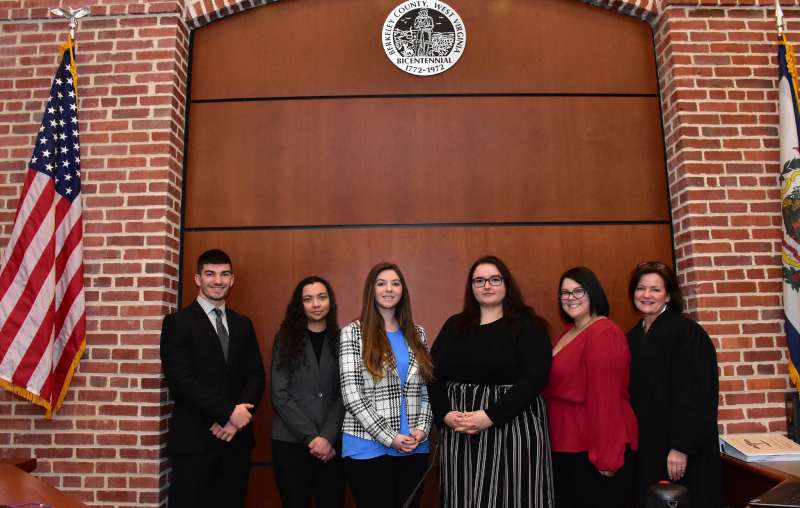