SHEPHERDSTOWN, WV — A Shepherd University professor is trying to determine what function the red, orange, and yellow colors on the painted turtle serve. Dr. John Steffen, assistant professor of biology, and two student researchers spent the summer collecting painted turtles from area ponds, bringing them to a lab at Shepherd where they were cared for and monitored, then released back to their original homes.

Steffen, who is a behavioral ecologist and herpetologist, said the data collected will help determine what plants may help turtles in the wild and what nutrients should be included in foods for pet turtles. Steffen said painted turtles get their colors by eating a pigment in plants called a carotenoid.

“The interesting thing is, it’s actually a yellow-colored pigment that is hidden under the green of the plant,” Steffen said. “In their body they start converting it to other pigments. There seems to be a physiological conversion when they eat these carotenoids and they alter them into something different by the time they get to their skin. I am trying to understand why they do that.”

Steffen said other species, such as fish and birds, sometimes gain health benefits from converting the pigments, so he’s trying to learn whether this process could improve things like blood health and parasite resistance in turtles.

Two students, Rhett Quigley, a biology major from Martinsburg, and Ian Whibley, a biology major from Berkeley Springs, worked with Steffen throughout the summer through the Shepherd Opportunities to Attract Research Students (SOARS) program. In 2017, the West Virginia Higher Education Policy Commission Division of Science and Research awarded Shepherd a three-year, $142,000 grant from the Research Challenge Fund that provides stipends for science and mathematics students to spend the summer helping professors doing research. Quigley said during the summer, he and Whibley collected the turtles and helped take care of them while they were in the lab.

“We took some blood samples from them and then measured the wavelength of their colors,” Quigley said. “For a couple of months, we fed them food with one half carotenoids and one half no carotenoids, then we measured their color to see if there was any kind of a change.”

After two months, the turtles were released back in the ponds where they came from. Quigley said they are now working on interpreting the data they collected to determine if the colors changed based on diet.

“I thought it was really fun,” Quigley said. “I haven’t done any in the field research, so it was a new experience. I plan to do more research like this later.”

Steffen is analyzing the data to determine whether the feeding experiment changed the turtles’ color. In previous research, he used all males, but decided to add females this year. 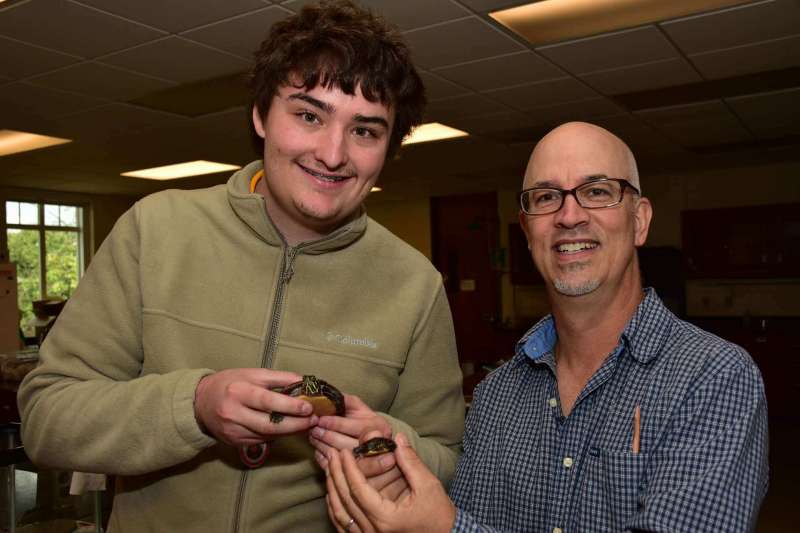