SHEPHERDSTOWN, WV — Shepherd University cosponsored a one-day conference in England in July that focused on the work of Cecil Sharp, an English folklorist and musician who traveled to southern Appalachia 100 years ago to document and record the region’s music. Dr. Benjamin Bankhurst, assistant professor of history, helped organize the conference, “Pastoralism and Modernity in the Southern Mountains: A Centenary Symposium on Cecil Sharp’s 1916 Appalachian Journey,” alongside the English Folk Dance and Song Society (EFDSS) in London.

Bankhurst said Sharp, who had been instrumental in resurrecting folk culture in the early 20th century in England, and his collaborator, Maud Karpeles, came to the United States in 1916 to lecture about English folk music. They also traveled into the mountains of southern Appalachia to document the traditional English folk songs that had survived there. The 2000 film “Songcatcher” is loosely based on work by Sharp and Olive Dame Campbell, an American who also documented Appalachian folk music and who founded the John C. Campbell Folk School in Brasstown, North Carolina.

“Sharp spent nearly two years in the mountains collecting ballads, mainly in North Carolina and Southern Virginia, but he did arc up for a few days to Southern West Virginia,” Bankhurst said. “He was one of the most prolific of the early song collectors. The fact that this European, this Englishman, showed an interest in these old mountain songs gave the material an air of respectability at a time when the public perception of Appalachian culture was quite negative. Sharp’s interest in this material redeemed it in the eyes of a culturally elitist metropolitan audience. People were really open to Sharp in a way that they might not have been open to others.”

“That collection is largely credited with resurrecting the reputation of Appalachia to a wider audience,” Banhurst said. “In the 19-teens and 20s, when people thought of Appalachia they thought of news stories about the Hatfield and McCoy feud and, later, the violence in coal country.”

Bankhurst said Sharp’s efforts sent the message to the rest of the country that some of Appalachian culture was worth preserving.

“Sharp came in and said that there were aspects of the region’s culture that should be considered alongside the most cherished literature in the English language, that these ballads should be judged alongside the sonnets of Shakespeare,” Bankhurst said. “To have a European come over and voice these opinions convinced many Americans to rethink their views on the region. Maybe there was something to these ballads and to culture of the mountains. So he constructed a very positive image of Appalachia.”

Bankhurst said Sharp was attracted to the mountains because he viewed them as isolated locales that hadn’t been touched by industrialization, which Sharp considered the great enemy that destroyed traditional culture in his own country.

“He looked to England and he saw that the railroads had drained the countryside of the laboring poor, brought them into the cities, and severed their connection to their country roots. With this dislocation they lost a sense of themselves and their self-worth. Industrialization had transformed English culture beyond recognition,” Bankhurst said. “Sharp was searching for what had been lost in his own country. He was searching for England in America, for traces of pre-industrial Europe preserved in amber. As a result, Sharp painted a picture of Appalachia as a white, European enclave—a very homogeneous image of mountain culture.”

Bankhurst contrasts the image Sharp painted of Appalachia with that of another musicologist and song collector, Alan Lomax, who tended to focus on the nonwhite traditions that fed into Appalachian music. Lomax saw the region as dynamic, changing, and very American. Bankhurst said the conference compared those two images of Appalachia and tried to come to a more nuanced vision of the region. Bankhurst argues we should challenge the image of a white Appalachia that Sharp created; however he points out that whatever people think of Sharp’s efforts, he did preserve music that might have otherwise been lost.

During the conference, participants heard renditions of Sharp’s ballads performed by Scottish folk musician, Alasdair Roberts, reminding them that these ballads were part of a larger trans-Atlantic cultural tradition. They also heard some current North Carolina musicians perform traditional mountain ballads via Skype.

“Many of these musicians come from the ballad tradition stretching back to the time Sharp arrived in the southern mountains,” Bankhurst said. “Some of them were related to figures who were visited by Cecil Sharp and they told stories from their family about the arrival of this dapper English gentleman into their community. So that was really fascinating.”

Bankhurst hopes to incorporate the centenary of Sharp’s visit to Appalachia into the West Virginia history class he teaches at Shepherd.

“For better or worse, Appalachia looms large in the American imagination” Bankhurst said. “I think Cecil Sharp is a great case study to present to students to make them question both the presentation of Appalachian culture and who’s defining it. I think those are very important questions.” 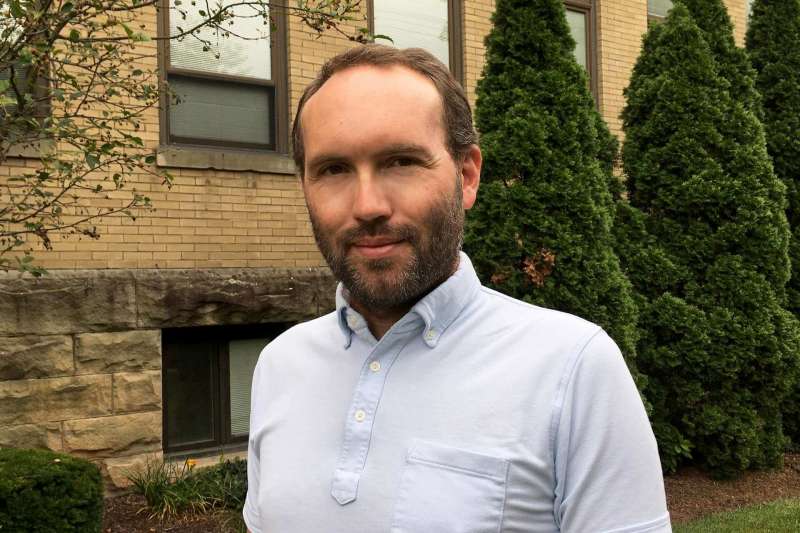