SHEPHERDSTOWN, WV — A Shepherdstown painter and printmaker who is serving as a Shepherd University artist-in-residence this year is the latest regional artist featured in an online web series, ArtVoiceWV, produced by 78 Degrees West Films of Berkeley Springs. In the video Susan Carney, who received a bachelor of fine arts degree from Shepherd in 1999, explains her artistic philosophy and demonstrates how she creates her work.

The video was shot in November in the Center for Contemporary Arts printmaking studio by Jack Kelly, who has 30 years experience in public broadcasting. Kelly’s wife, Marla, conducted the interview.

The ArtVoiceWV web site describes Susan as a painter and printmaker who works with monotype, a printmaking process in which only one print is created. It goes on to say that, because she works with stencils, she often produces a series of similar prints, yet each is unique. Carney told ArtVoiceWV she likes to experiment with texture using canvas, burlap, or plastic. She also uses watercolor, spray paint, acrylic paint, varnish, and collage on wood, canvas, and paper.

Carney said she usually creates monotypes with images that look good as silhouettes. The video shows her cutting out metal stencils and applying paint to them with rollers. She also puts paint on a rough piece of burlap. Everything is then rolled through a giant press to create a print.

“This is what I’m supposed to do, and I’ll probably do it until I die,” she says in the video.

Rhonda Smith, professor of art and chair of the Department of Contemporary Art and Theater, said Carney will continue as artist-in-residence and has volunteered to conduct workshops on her unique monotype process for students. Smith also hopes to incorporate one of Carney’s workshops into her Printmaking I class in the spring.

“Ms. Carney has developed a genuinely innovative method of creating prints, and students have already benefited hugely from her presence in the studio,” Smith said. “As a professional working artist who spends up to 8-10 hours a day in the studio, she is a reminder to the students that printmaking is about the exploration of the process and the willingness to make it work.”

Smith explained that Carney’s first print of the day is often heavily saturated with ink. Additional sheets of paper are then laid over the stencils and backing, and Carney may decide to flip or rearrange the stencils before printing the second, third, or fourth image.

“This process of reviewing the work on the press and deciding how best to proceed is an important part of the exploration of the print and the image,” Smith said. “Students who observe this process begin to realize that Carney is allowing the work to dictate what should happen next.  They will also see that not all the prints produced in any given day are keepers.”

Smith said Carney often returns the next day and continues to layer images, but no print is ever fully discarded.

“This is a valuable lesson for all students,” Smith added.

Smith thinks the ArtVoice WV video is a wonderful opportunity for more people to see how Carney produces her art.

“And I always think it is important to understand some of the motivation behind the imagery and subjects in the work,” Smith said. “Knowing helps the audience feel more connected to it.” 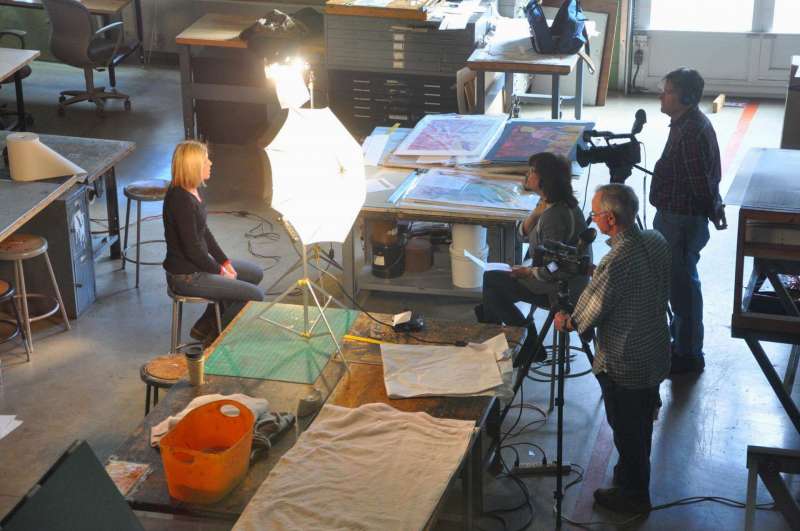 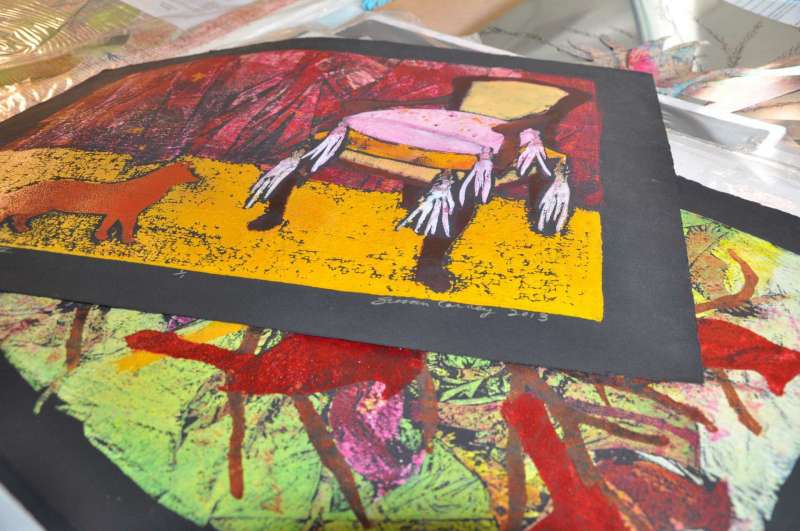 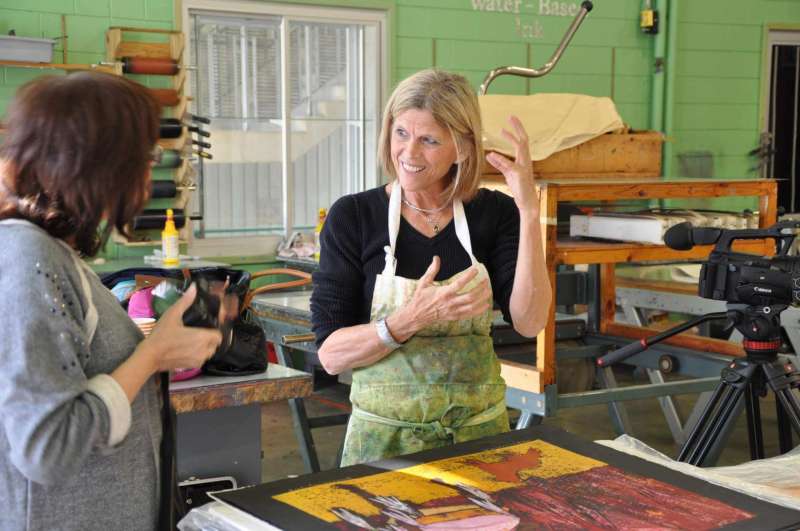