SHEPHERDSTOWN, WV — Students in the Shepherd University general ecology class are learning a little more about what Shepherdstown was like during the Civil War through a data-gathering project. Dr. Mark Lesser, assistant professor of biology, assigned his students the task of gathering data at Elmwood Cemetery that will hopefully tell them how the Civil War impacted the lifespan of people living in the Shepherdstown area before and after the war.

“It’s really interesting to look at human data,” Lesser said. “A big part of ecology is looking at how populations grow over time and the survivorship and mortality rates of those populations. This type of analysis can be applied to any species.”

On a recent afternoon, a group of students made their way from gravestone to gravestone, collecting the birth and death dates of 20 males and 20 females who lived before 1864 and 20 males and 20 females who lived after 1864. Once all the data is collected, it will be entered into a spreadsheet so the students can try to determine the Civil War’s impact.

“That allows us to look at survivorship during those two time periods on a gender-specific basis,” Lesser said. “Population growth over time is something we’ve spent quite a bit of time in class looking at from a theoretical point of view. Collecting real data gives the students a much more hands-on understanding of the material.”

Lesser is collaborating on the project with Dr. James Broomall, assistant professor of history and director of the George Tyler Moore Center for the Study of the Civil War. Broomall spoke to Lesser’s classes, giving the students some historical context to their data. He said Elmwood has 18th and 19th century sections, Methodist and Presbyterian sections, and a Confederate section

“Shepherdstown was literally a crossroads during the Civil War,” Broomall said. “In 1861 Henry Kyd Douglas and members of the 2nd Virginia Infantry Regiment set fire to the bridge that spanned the Potomac River. In 1862 Union and Confederate armies came through Shepherdstown during the Maryland Campaign. In 1863 and 1864 there were many instances where tens of thousands of soldiers, even hundreds of thousands of soldiers, came through this area.”

Broomall pointed out that even before the Battle of Antietam—where 23,000 soldiers were killed, wounded, or missing—wounded soldiers from the Battle of South Mountain streamed through Boonsboro and Sharpsburg, Maryland, and Shepherdstown.

“One of the things I wanted to really stress to Dr. Lesser’s students is to think about the potential impact an event like this can have on the community,” Broomall said. “Take disease, for instance. If you have a community of just over 1,000 people in the prewar era and all of a sudden its population is bigger than the current population of Shepherd University’s student body, you have the potential for all sorts of epidemics.”

Adam Hall, of Inwood, finds it interesting to learn about the history behind the data that the class is collecting.

“In a scientific context it will be interesting once we are able to analyze the data to see how the war affected people and how this town was affected by the war,” Hall said.

J.D. Wright, of Bunker Hill, believes the data will show people in Shepherdstown died younger during the Civil War than afterward. He said going to the cemetery really opened his eyes to all the soldiers who were killed in the war, especially those in unmarked graves.

“The majority of those buried in the Confederate memorial were unknown and don’t even have a birth and death date,” Wright said. “Shepherdstown was basically a hospital town and there were many infections running rampant that affected not only the soldiers but everybody.”

Tiffany Heerd, of Berkeley Springs, said it will be interesting just to see the difference in the death rate between men and women before, during, and after the war.

“We think there will be more death during the Civil War just because of men’s positions in the military,” Heerd said. “But we noticed females tended to die earlier due to reproductive issues. So it’s going to be interesting to plot that out and see.”

Elizabeth Eaton, of Martinsburg, said the cemetery research was a little solemn, but interesting to do. She said collecting data from the gravestones taught her that some families had to deal with some devastating losses.

“I noticed there was a cluster of graves from these three sisters. When they died they were ages 10, one year, and nine months,” Eaton said. “We found out that their grandfather lived to 111. So not only did he have to witness the deaths of his three granddaughters at such a young age, but the oldest one, the 10 year old had to lose her two sisters and then she died. It makes you wonder what the cause of it was and it just really brings a solemn aspect to everything as we’re working through it.”

Broomall believes this collaboration between biology and history benefits students in several ways.

“I think it shows the students that the sciences and the humanities matter a great deal and that one informs the other in profound ways,” Broomall said. “If you take out the history, all of a sudden the demographic data loses its relevancy. If you take out the science, we don’t have the demographic data that informs our history. So the two ventures are very much necessary to form a complete portrait of what’s going on in this community across several centuries.” 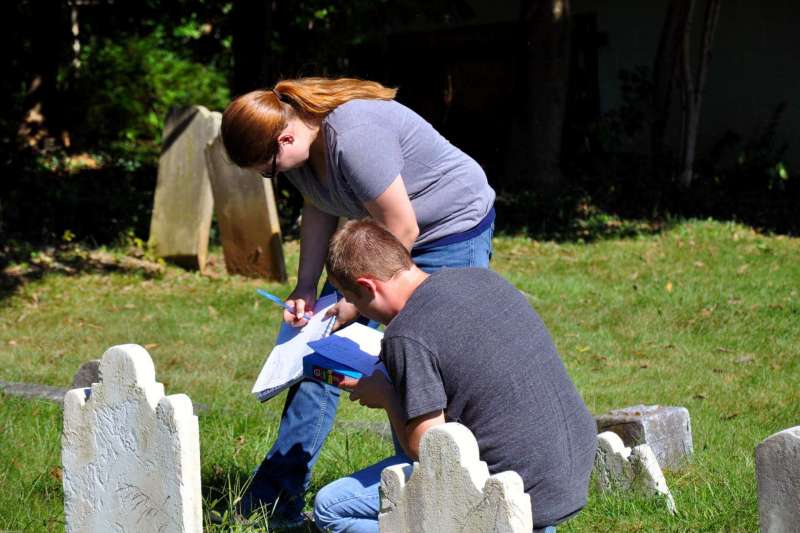 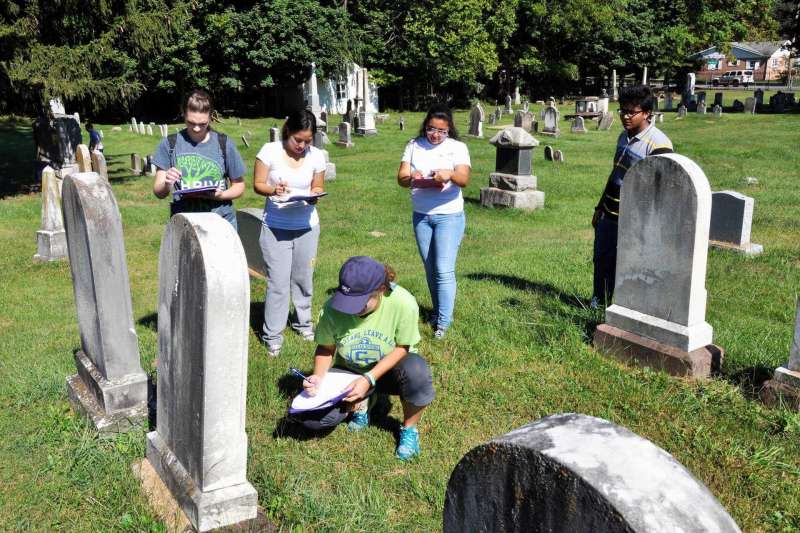 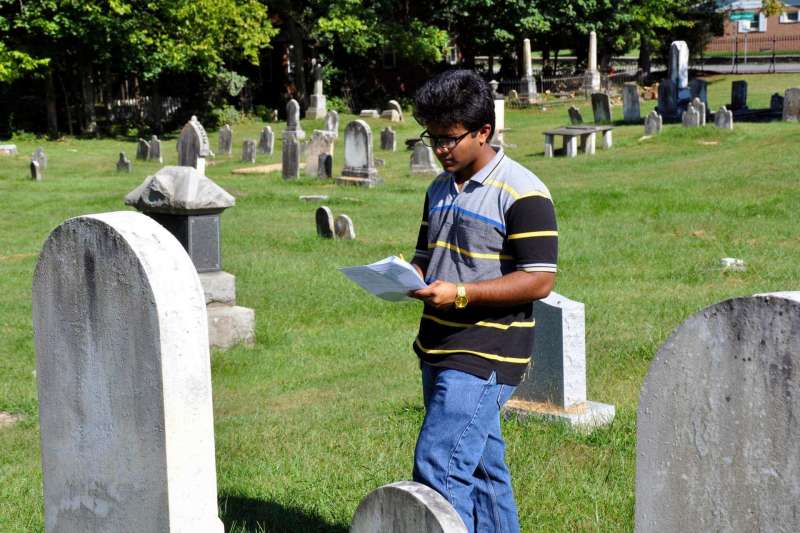 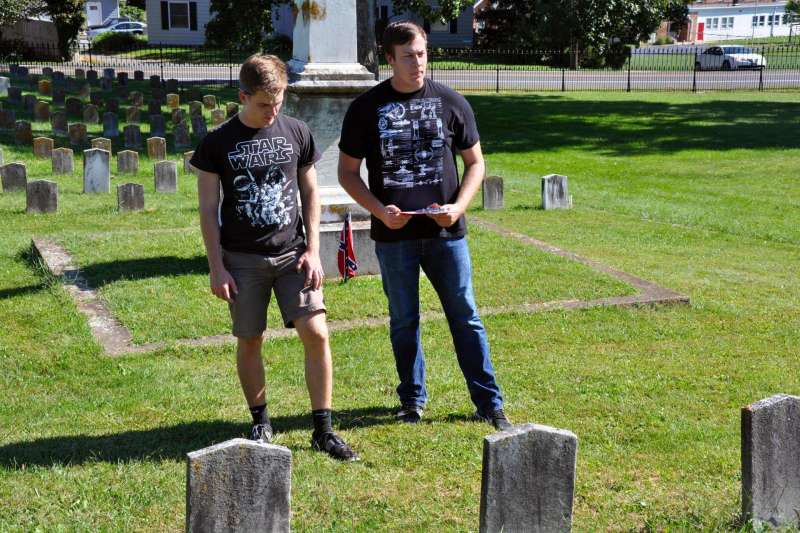 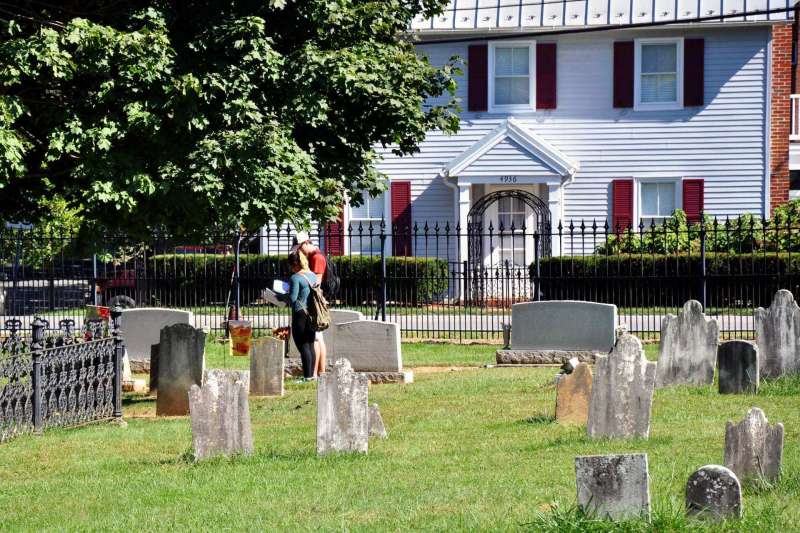