SHEPHERDSTOWN, WV — Shepherd University’s Scarborough Library is celebrating its 50th anniversary this year with an exhibit in the Reading Room about a unique event that brought the campus community together to move books and other materials from the old library in Knutti Hall to the current location.

The exhibit has memorabilia from a book walk that took place on October 28, 1965. Afternoon classes were canceled and in about four hours, 500 students and 65 faculty, administrators, and staff worked together to move almost 39,207 items into the newly constructed library. The collection included 39,000 volumes, 370 phonograph records, 300 filmstrips, 135 microfilm reels, and 276 periodical subscriptions.

“There is a November 10, 1965 issue of The Picket with a headline that says ‘School Spirit Moves the Library,’” said Christy Toms, staff librarian in charge of special collections and digital initiatives. “And that’s exactly what moved the library because I can’t even imagine moving approximately 40,000 items in four hours without teamwork and organization, which is what they had to do, which is amazing.”

Barbara Maxwell, retired assistant library director, was a senior at Shepherd at the time working in the library as a student assistant. Maxwell recalls it was a brisk fall day.

“It was sweatshirt weather,” she said. “It was a good thing too because when you’re trudging along and keeping things going it’s easier to do that when it’s cooler.”

Maxwell said Shepherd got the idea for a book walk from other colleges that had moved books in this way. Maxwell said the library bought special boxes that were the same size as a library shelf so the books could be loaded, taken to the new library, and shelved in the correct order.

“We had several other student assistants working and each of us was assigned different areas,” Maxwell said. “I was assigned to help move the reference collection. Then I worked for Margaret Hughes, who was the other librarian at the time, and I helped move the stuff that went upstairs.”

Maxwell said it took months to plan the book walk.

The book walk was a well-documented event. A large binder in the library contains written and photographic material that tells what happened. It includes a mimeographed press release sent out by Shepherd at the time, photographs of students, faculty, and staff moving the books, a ledger signed by everyone who participated, and essays written for an English class by students who helped.

Toms said organizers created seven teams that worked in two shifts. She said each team was given a collection to transport and assigned a path to move the books so they wouldn’t bump into each other. There were boxers in Knutti who removed the books from the shelves, then carriers took them to the new library where shelvers put them on the new shelves. The carriers then took the boxes back to Knutti where they were loaded with more books. Lighter boxes were carried from Knutti to the library and a chain of people passed the heavier boxes.

Jean Elliott, librarian emerita, worked in library from 1961-1996. She was the reference librarian in 1965 and remembers the book walk being a festive event that included a band from the music department playing lively tunes on the porch of the new library and refreshments like cookies, apple cider, and hot chocolate served in the Rams Den.

Two alumni, the Rev. and Mrs. John Link, carried the ceremonial first books. The Links had been students at Shepherd in 1904 and helped when the library was moved from McMurran Hall to Knutti. They began the 1965 book walk by carrying the first three books from Knutti to the new library, which Toms estimates is about 200 feet down King Street. Then everyone began the process of moving the rest of the library collection.

“To keep their spirits up, participants would do different kinds of chants,” Toms said. “So they would chant out the word books—B-O-O-K-S. Some students played with the boxes and kind of made drums. They had refreshments at the Ram’s Den—hot chocolate, cider, cookies.”

When it was housed in Knutti, the library took up several rooms that stretched across the entire back of the first floor. Elliott said it was nice to have the extra room in the new library, which included the first and second floors. She said the new library also had a circulation desk and book drop—two things they didn’t have room for in the old library. Elliott said the basement in the new library was initially used as classroom space and for a period of time the business department was located there.

“When White Hall was built, the business department moved out and went down there, which helped us a lot because we got rid of all those accountants studying and making so much noise,” Elliott said with a chuckle.

This was the first time Shepherd had its own separate state-of-the-art library building, and many who participated seemed proud they could take part in such a historic occasion.

“From what I researched it was one of those moments you never forget,” Toms said. “They felt like they were part of something larger than themselves. It was just a fun, enthusiastic, momentous, historic day for the campus.”

“Most of the kids that were involved talked about it long afterwards—about how much fun they had,” Elliott said.

Listen to Christy Toms talk about the book walk HERE.

To hear Barbara Maxwell reminisce about the book walk HERE. 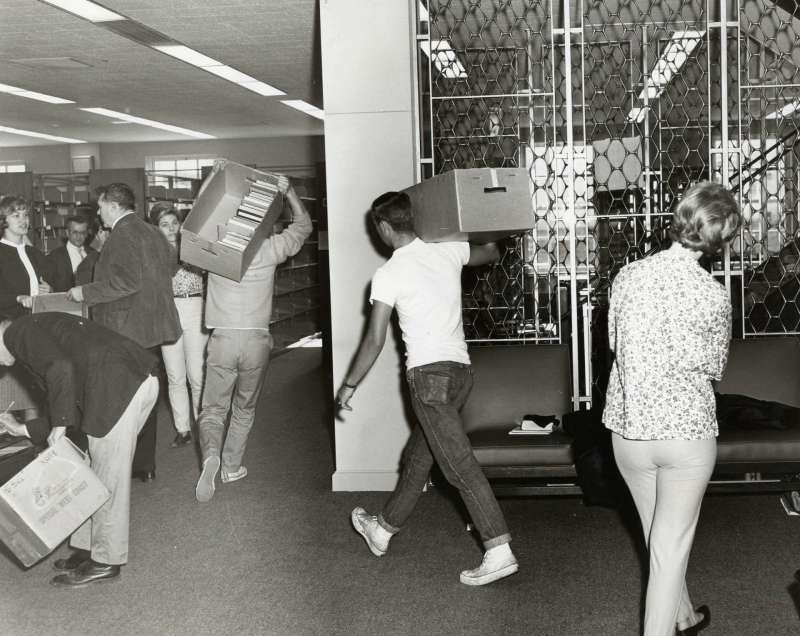 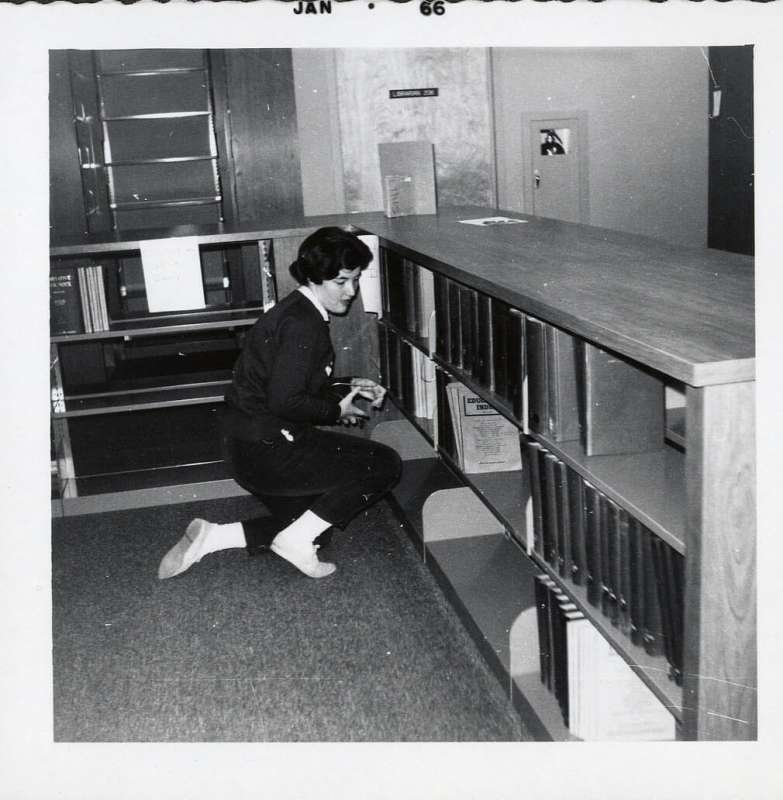 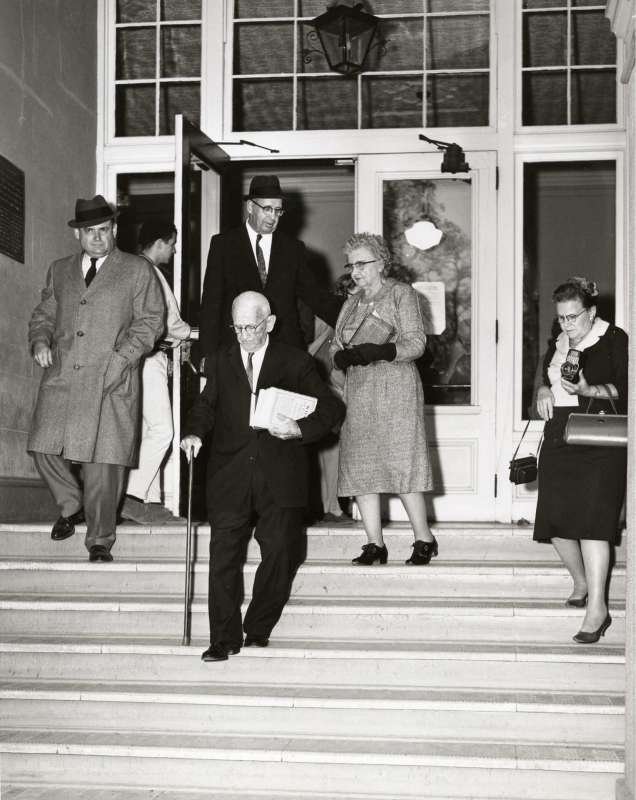 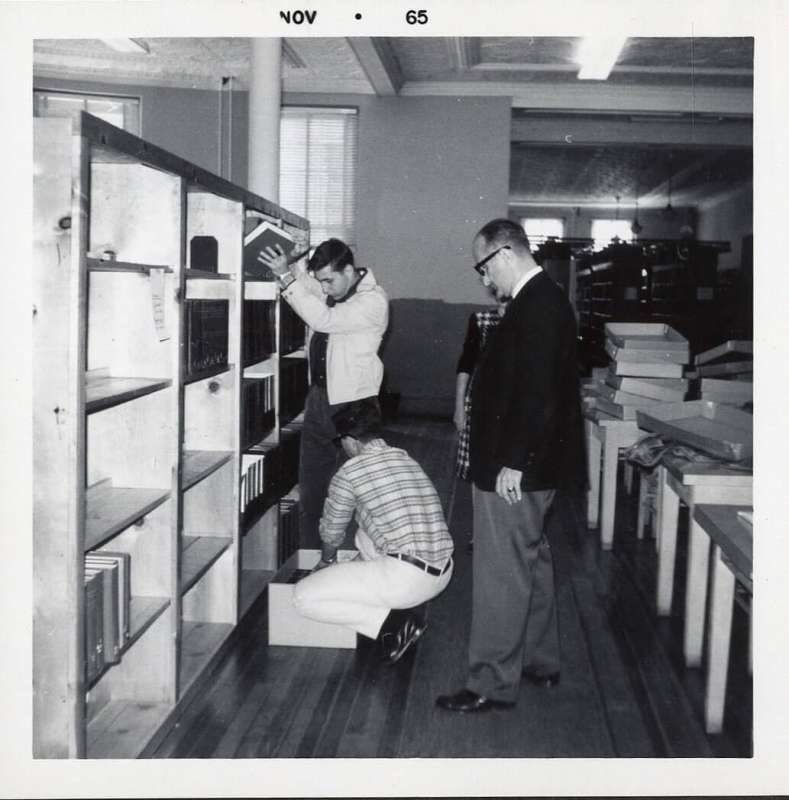