SHEPHERDSTOWN, WV — The Shepherd University Department of Music Salon Series sponsored by Jefferson Security Bank continues on Thursday, December 6, at 7:30 p.m. in the Frank Center’s W.H. Shipley Recital Hall with The Vivaldi Project. The concert is free and open to the public, with seating limited to 120.

The Vivaldi Project, which includes violinists Elizabeth Field and Allison Edberg Nyquist and cellist Stephanie Vial, presents innovative programs of baroque and classical string repertoire that combine scholarship and performance. The group’s performance at Shepherd in January prompted an overwhelming request to bring it back. The December 6 concert will feature selections of music from The Vivaldi Project’s first and second volume of classical string trios, which include works by Campioni, J.C. Bach, Haydn, and other masters of the period.

Field, founder of The Vivaldi Project, is concertmaster of The Bach Choir of Bethlehem in Pennsylvania. She also performs with a wide variety of ensembles throughout the U.S., from Washington, D.C.’s Opera Lafayette to the Sun Valley Summer Symphony. A former member of Brandywine Baroque, Field was also a founding member of the Van Swieten Quartet. In addition to period instrument recordings for the Hungaroton, Naxos, and Dorian labels, Field has performed and recorded extensively for Deutsche Grammophon with the Orpheus Chamber Orchestra. Field, along with Vial, is co-director of the Institute for Early Music on Modern Instruments. Field’s DVD with forte pianist Malcolm Bilson, “Performing the Score,” explores 18th-century violin/piano repertoire.

Nyquist has been praised by the Chicago Sun Times as “impeccable, with unerring intonation and an austere beauty.” She has performed throughout North America, collaborating with many of the top baroque ensembles, including Chatham Baroque, Olde Friends, and Apollo’s Fire. She is frequently featured at the Indianapolis Early Music Festival. Her discography includes recordings for the Eclectra, Delos, MSR Classics, and Centaur CD labels. Nyquist is concertmaster of the Indianapolis Baroque Orchestra, and a member of Ensemble Voltaire, Haymarket Opera Company, Third Coast Baroque, and the newly appointed artistic director of Music City Baroque in Nashville, Tennessee.
​
Vial performs regularly in early music ensembles throughout the U.S. and has given solo and chamber music concerts, lectures, and master classes at numerous universities and institutions. Along with Field, she is the co-director of The Vivaldi Project and its educational arm, the Institute for Early Music on Modern Instruments. Her 2008 book, “The Art of Musical Phrasing in the Eighteenth Century: Punctuating the Classical ‘Period,’” was published by the University of Rochester Press Eastman Studies in Music series. Vial has recorded for the Dorian, Naxos, Hungaroton, MSR classics, and Centaur Records labels.

For more information about the concert series or other music department events, call 304-876-5555 or visit www.shepherd.edu/music. 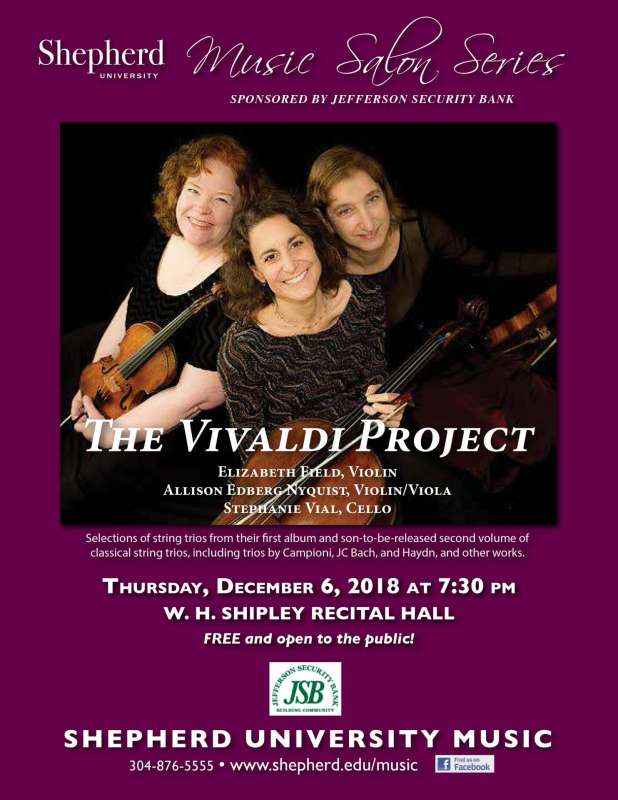