SHEPHERDSTOWN, WV — The next Shepherd University Salon Series concert, sponsored by Jefferson Security Bank and featuring the jazz of Thelonious Monk, will take place on Thursday, March 23, at 8 p.m. in the Frank Center’s W.H. Shipley Recital Hall. Shepherd music professors Dr. Kurtis Adams on saxophone, Dr. Mark Andrew Cook on piano, Joshua Walker on guitar, Kevin Pace on bass, and Ronnie Shaw on drums will perform in the concert, which is free and open to the public.

Adams, associate professor of music and director of jazz studies, has performed with the Colorado Symphony Orchestra, Colorado Music Festival Orchestra, Ultraphonic Jazz Orchestra, Metropolitan Jazz Orchestra, and the 9th and Lincoln Orchestra. In 2005, Downbeat Magazine named Adams college co-winner for Best Original Composition for his composition “Instable Mate?,” and in 2007 he was selected to participate in the Paquito D’Rivera Latin Jazz Workshop performing with the Grammy-winning saxophonist at Carnegie Hall in New York.

Cook, associate professor of music, performs extensively throughout the region, including with the Two Rivers Chamber Orchestra, the Shepherd University Faculty Jazz Group, and with his own group, Set Theory. As the pianist for the Mike Kamuf Little Big Band, Cook is featured on a CD/DVD that was released at The Mid-Atlantic Jazz Festival. He is also the pianist for David Detwiler’s White House band, which has performed at Blues Alley, the State Theater, and many other jazz and concert venues.

Walker, adjunct music instructor, has performed at festivals, venues, and events such as the Montreal International Jazz Festival, Toronto International Jazz Festival, International Jazz Educator’s Conference, John F. Kennedy Center for the Performing Arts, and the 150th Anniversary of the Opening of the Port of Yokohama, Japan. Since 2010, he has held the guitar chair in the award-winning Bohemian Caverns Jazz Orchestra in Washington, D.C. Walker won Downbeat Magazine’s 2011 award for Best Blues, Pop, or Rock Solo By An Instrumentalist at the College Graduate Level.

Pace, adjunct music faculty, is a winner of the Louis Armstrong Jazz Award. He has toured throughout the world and has performed with the orchestra of the Long Leaf Opera Company of Durham, North Carolina, and in pit orchestras for musicals such as “Urinetown,” “A Chorus Line,” “The Music Man,” and “Company.” Pace has toured throughout Germany and Austria and played at the East Coast Jazz Festival, where he returned as an assistant clinician for the 2002 festival and as a member of the Adam Janjigian Quartet in 2004 and 2005.

For more information about the Salon Series and other music department events, call 304-876-5555 or visit www.shepherd.edu/music. 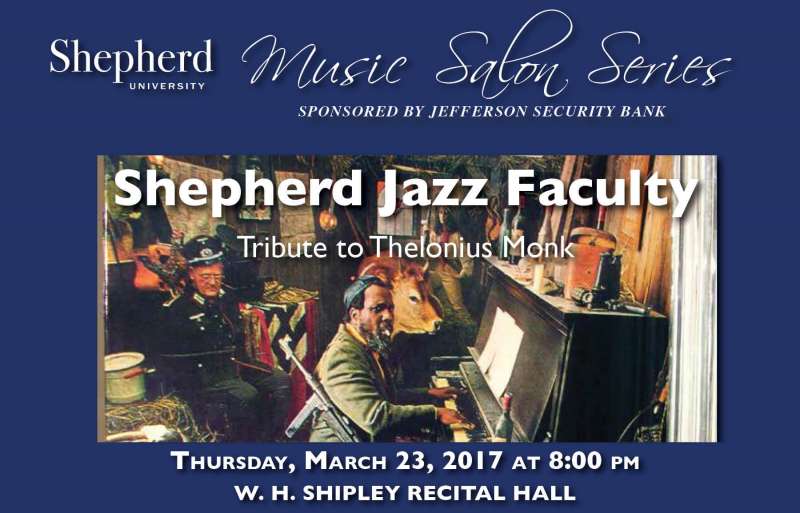