Rude Mechanicals to perform ‘The Duchess of Malfi’ November 11-14

SHEPHERDSTOWN, WV — Shepherd University’s Rude Mechanicals Medieval and Renaissance Players will perform John Webster’s “The Duchess of Malfi” in Reynolds Hall during the first two weeks of November. Performances are scheduled Friday and Saturday, November 6-7 and November 13-14 at 7:30 p.m.; Wednesday and Thursday, November 11-12 at 8:45 p.m.; and Sunday, November 8 at 3 p.m. Admission is $7 for the general public and free for Shepherd students with a valid Rambler ID.

“The Duchess of Malfi,” written in 1612 by John Webster, a younger contemporary of Shakespeare, depicts the corruption and violence of Renaissance Italy. Revenge, adultery, murder, incest, insanity, corrupt churchmen, spies, hired killers, and werewolves are only some of what Webster wrote about in the play. The title character is the duchess, a young widow who decides that she will marry whom she chooses, regardless of the wishes of her two brothers—a psychotic and incestuous aristocrat and a corrupt cardinal of the church. The other main character, Bosola, a hired killer, decides too late to seek revenge against the men who have hired him.

According to Dr. Betty Ellzey, chair, Department of English and Modern Languages, “The Duchess of Malfi” explores the dangers of surviving literally and psychologically in a world filled with corruption and violence. Those who live by deceit, betrayal, and violence—Ferdinand and his brother, the cardinal—die by the same. The duchess and Antonio find love and happiness for a while, but are ultimately destroyed. Bosola, a spy and hit man, tries to atone for his crimes, but it’s too late.

“Although written more than 400 years ago, ‘The Duchess of Malfi’ is still relevant, especially in times of uncertainty and crisis,” Ellzey said. 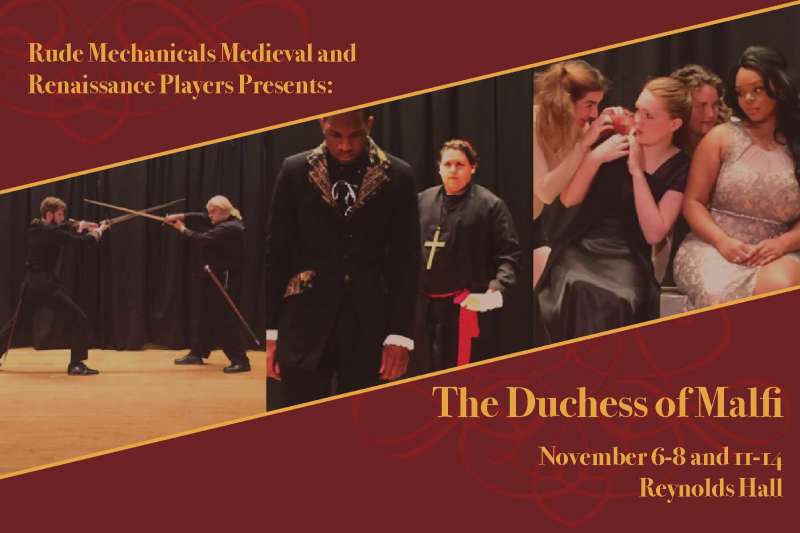