Research by Hendrix featured in the journal ‘Science’

SHEPHERDSTOWN, WV — Groundbreaking cancer research led by Shepherd University President Mary J.C. Hendrix was featured in an article in the June 16 issue of the journal “Science.” The article focuses on work Hendrix’s lab has been conducting over the past two decades looking at how highly aggressive tumors metastasize, or spread throughout the body.

Hendrix’s research has its roots in post-doctoral work she did at Harvard University in the late 1970s when a professor there, Dr. Judah Folkman, was conducting research on the then-new theory of tumor angiogenesis. This is the process where tumors secrete a substance that signals nearby blood vessels to grow into them, feeding the tumors the oxygen and nutrients that allow them to grow and spread to other parts of the body. Hendrix’s lab has taken Folkman’s theory to the next level, exploring how aggressive tumor cells are capable of forming their own vasculature and connecting to nearby blood vessels, and coining the phrase vasculogenic mimicry (also known as vascular mimicry) to describe this discovery .

“I learned from a developmental biologist perspective that a growing tumor is analogous to a growing embryo,” Hendrix said. “Our concept complemented his (Folkman’s) because we observed tumor cells forming their own vascular network to meet these angiogenic vessels at the tumor periphery. So the most aggressive tumors would be able to have an instant blood supply, but most noteworthy, would also have an escape route from the original tumor to be able to immediately spread throughout the body.”

Hendrix’s lab did its research on human cells extracted from tumors that had been surgically removed from patients.

“We would study these tumor cells using molecular tools, and we would specifically look at all the genes that were being expressed by them,” she said. “What was so intriguing to us was to see genes being expressed by these tumor cells that were associated with embryonic development, especially during the construction of a blood vessel. We started to think that these tumor cells were multi-potent, meaning they could form multiple types of tissues. No one had ever thought about cancer cells in that way until genomic analysis revealed the underlying molecular spectrum.”

Hendrix said Folkman’s concepts of tumor angiogenesis guided the pharmaceutical industry for years. There were many clinical trials based on the goal of preventing blood vessels from nourishing a tumor. But Hendrix never thought angiogenesis inhibitors would be successful on the most aggressive tumors because she believes, and has helped prove, that tumor cells can form their own blood vascular through vascular mimicry, and these tumor cells do not respond to angiogenesis inhibitors.

Her team is now working with a pharmaceutical company, TaiRx, and one of her former students, Dr. Yi-Wen Chu, TaiRx’s senior vice president, to determine whether a drug developed by the company, CVM-1118, slows the growth of blood vessels created within tumors. The initial research showed that the drug worked, so TaiRx is now pursuing United States Food and Drug Administration approval and conducting phase I clinical trials to determine safety and dosage.

Hendrix said her lab will continue to explore how the drug works and whether there are side effects. She said understanding how CVM-1118 works is important because many of the early cancer drugs were toxic to patients, impacting normal cells along with the cancer cells. Now scientists focus more on finding therapies that specifically target the tumor cells while sparing normal cells.

“If this therapy is successful, we can think about it a few different ways,” Hendrix said. “It could be delivered as a mono therapy—all by itself to a patient—and it would target tumor cell vascular mimicry. Or, it could be delivered in a combinatorial manner, meaning this therapy could be used with some of the front line angiogenesis inhibitor therapies. If you used an angiogenesis inhibitor that targets the growth of new vessels into a tumor together with an agent that targets tumor cell-forming vessels within the tumor mass, then you would have effectively targeted both routes of nutritional sources and routes of escape for tumor cells. So it’s a great combination.”

Hendrix, who has seven patents in cancer research, hopes this new therapy is successful and gives people with the most aggressive forms of cancer a new and effective treatment.

“We like to think that this would be a drug that would be added to the armamentarium of our current agents—to address and treat the most aggressive cancers,” Hendrix said. “Because tumor cell vasculogenic mimicry has now been described in almost every aggressive tumor type of the body, this therapy would have universal application for all kinds of cancers.” 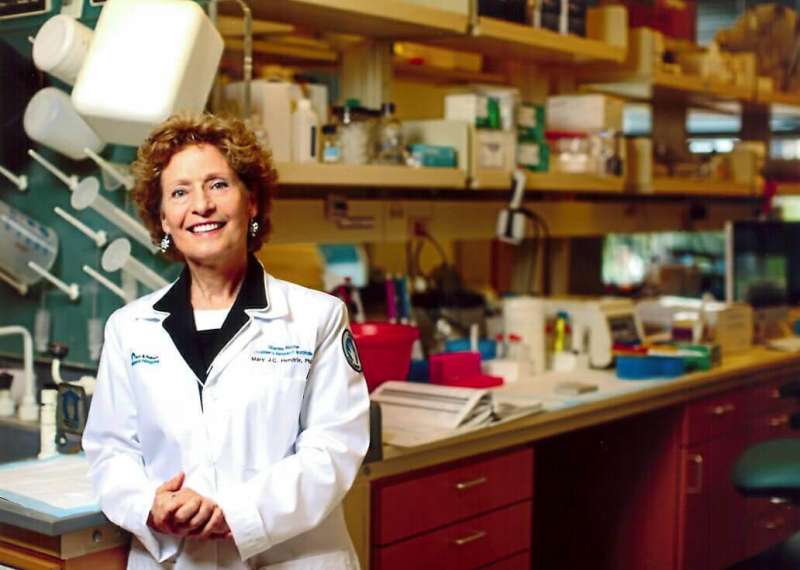