SHEPHERDSTOWN, WV — The Shepherd University President’s Lecture series continues on Tuesday, February 26, at 6:30 p.m. in the Robert C. Byrd Center for Congressional History and Education auditorium with a talk by Charlie Kiser titled “Understanding Bitcoin, Blockchain, and Cryptocurrency.” The event is free and open to the public.

This presentation will delve into the genesis, growth, and adoption of bitcoin, blockchain, and cryptocurrencies. Kiser will talk about the early struggles, regulatory curiosity and attempts at enforcement, and early business cases and financial infrastructure that are leveraging this new technology. He will discuss the practical applications of this technology today, how businesses are incorporating it, and whether regulators can globally foster understanding and still maintain control. This lecture will highlight the opportunities available with cryptocurrencies.

Kiser, a cryptocurrency, blockchain, and technology veteran, is CEO of Atlas Blockchain Group Inc., a publicly traded cryptocurrency mining company based in Vancouver, British Columbia. With a dedicated operations facility designed for scalability combined with some of the cheapest electrical power in the world, Atlas is ideally positioned to become one of the premier cryptocurrency mining and technology operations in North America. Along with his 20 years of technology experience, Kiser helped take the first pure-play bitcoin and blockchain company, BTCS, public in 2014 in North America. As the earliest public crypto company, BTCS leveraged both an operational and holding company strategy, investing in four crypto start-ups–GoCoin, covering payment processing; Coin Outlet, a bitcoin ATM and distribution network; Gem, a multifactor authentication wallet; and Expresscoin, a retail cryptocurrency outlet.

In his advocacy role at the first public blockchain company, Kiser became deeply embedded in the early crypto community and was one of the leading advocates in the first-ever Bitcoin Awareness Day on Capitol Hill in Washington, D.C. Kiser is a founding member and mentor of AccelerateDC, an initiative by the Washington, D.C., mayor’s office to help incubate and promote startups and entrepreneurship in D.C. He’s an advisor to several blockchain companies, including Loci and Build1x.

Other upcoming President’s Lectures taking place at the Byrd Center for Congressional History and Education this semester include:

• March 25—6:30 p.m., Dr. Arnold Bakker of Johns Hopkins Alzheimer’s Disease Research Center, “Neural Underpinnings of Memory Function on Aging and Disease.”
• April 22—6:30 p.m., A seated discussion on stage with Charlie Matthau and Alan Gibson. Matthau is currently working as director with Gibson on two feature films, The Book of Leah, starring Armand Assante, which Gibson executive produced, and The Seeding, a horror film based on Gibson’s book The Dead of Winter. 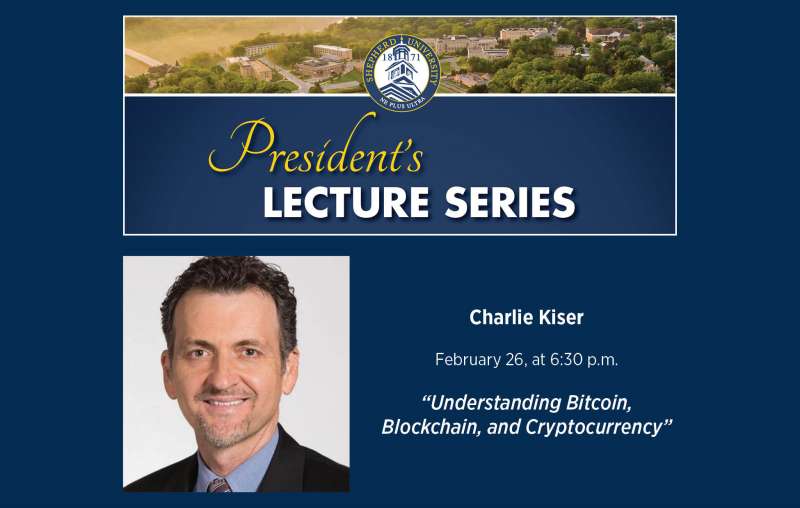