SHEPHERDSTOWN, WV — Shepherd University has signed an exploratory memorandum of understanding with the Ministry of Higher Education and Scientific Research, Republic of Mali. This agreement allows both parties to explore opportunities for potential student exchange and academic collaboration.

Shepherd University President Mary J.C. Hendrix and the Malian Ambassador to the United States, H.E. Tiena Coulibaly, signed the agreement on March 20. Charles Nieman, Shepherd’s director of international affairs, said this formalization reflects a deepening relationship with the Embassy of the Republic of Mali and the personal interest of the Ambassador following his initial visit to Shepherd in March 2015. It is also a realization of a dream of Shepherd graduate Siriki Diabate, who was instrumental in making the arrangements for the Ambassador’s first visit and in laying the groundwork for this agreement.

For Shepherd University, this is the first agreement in Africa. It is also the first with a country’s Ministry of Education. This high level of partnership will offer Shepherd faculty and students opportunities to collaborate across a wide range of disciplines or to study abroad in one of several universities within the Malian national system of higher education. As a former French colony, the Republic of Mali offers students a unique opportunity to study in a French-speaking educational environment outside of France, with the added benefit of doing so in a historically and culturally rich region.

In his remarks at the signing ceremony, Coulibaly said he looks forward to Malian students coming to Shepherd for short-term study, formal degree programs, or research. He also pledged the full support of the embassy in supporting a successful and fruitful implementation of the agreement. 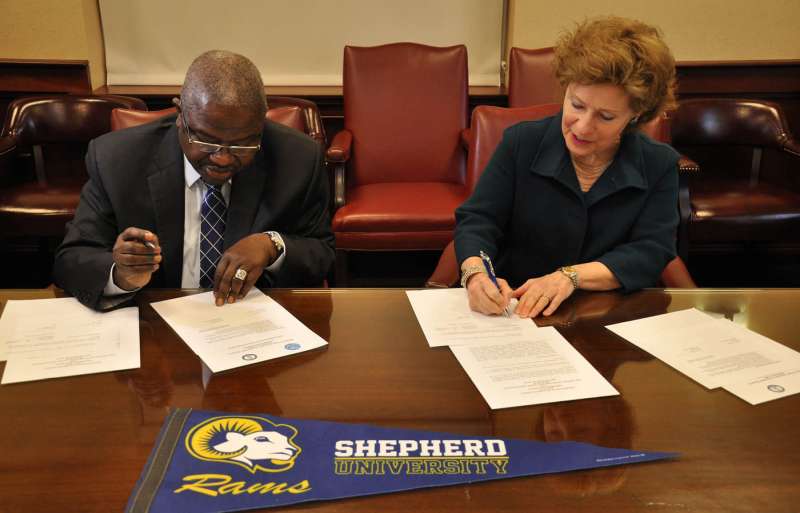