SHEPHERDSTOWN, WV — Popodicon, the business residence of Shepherd University President Mary J.C. Hendrix, is all decked out for the holidays, thanks to a volunteer effort by a new group dedicated to restoring the historic house. Members of the Friends of Popodicon spent a day in early December decorating the public rooms on the first floor, readying the house for public tours during the December 2-4 Civil War Christmas.

Using seasonal items found in the attic, along with decorations and greenery that were donated or loaned, 13 volunteers decorated the two large living rooms, the dining room, the wide central hallway, and the front porch. A cut tree donated by Ridgefield Farms sits in the corner of one living room. In the corner of the other living room there’s a small tabletop artificial tree that the volunteers augmented with fresh greenery.

Committee members put a mixture of live and artificial greenery embellished with things like bows, balls, berries, and pine cones on the three mantels, several table tops, and the stair railing. A regiment of nutcrackers stands at attention guarding the steps.

Decorating Popodicon for the holidays is one of many activities the Friends of Popodicon has done or plans to do in an effort to refurbish the house, which was built in 1907 in the Georgian Revival style. John Douglas Miller, owner of Miller Interiors of Gerrardstown, chairs the group.

“Overall the house is in very good condition structurally,” Miller said. “It’s been brought up to date nicely, it just needs to be loved a little bit, which we’re trying to do.”

Miller said the Friends of Popodicon doesn’t currently have a budget to work with, so the group is making improvements using what’s in the house or items that have been loaned or donated.

“The goal is to eventually upgrade everything to make it usable for functions that the university would have and possibly to have a couple of suites upstairs that guests of Shepherd can use,” Miller said. “We also need to upgrade the bathrooms, which are probably the worst part of the house. They need to be totally redone.”

There are five bedrooms on the second floor of the house and three on the third floor. Eventually all the rooms in the upper floors will be repainted. Members of the group have already repainted the dining room, which was red, to a more neutral color. Aside from volunteering time to do the work, they also bought the paint.

“That was sort of a gift of love to the house,” Miller said. “It went very well. It was very easy to do and everybody was happy and enjoyed actually making a difference here.”

Joy Lewis, a Shepherd alumna who is currently Gov. Earl Ray Tomblin’s Eastern Panhandle representative, took time from her schedule to help with the holiday decorations.

“I wanted to give my time and energy to making Popodicon great for the holidays,” Lewis said. “I feel it’s important to maximize the use of Popodicon to the community and to make it open to people all across the state.”

Peachy Staley, also a Shepherd graduate, said she hadn’t been in Popodicon since the 1970s. She was quick to volunteer when Dr. Mary J.C. Hendrix, Shepherd’s president, asked her to help.

“It’s a real honor to be a part of all of this,” Staley said. “It’s a part of Jefferson County’s history and it’s a part of the university’s story. I think having it open and welcome to the public is important. It’s given the house a new life, and the community is very excited about this—that they’re welcome into the home—so I think we owe it to our citizens, really.”

Connie Hoxton is also volunteering to be a friend of Popodicon and helped decorate the house for the holidays.

“I didn’t go to Shepherd, but I want to support the school and I want to be a good neighbor,” Hoxton said. “It’s historical and we need to save it and maintain it for future generations.”

While the Friends of Popodicon work to improve the interior of the house, another separate group is charged with restoring the historic gardens. Throughout the summer and fall, volunteers have spent time weeding the flower beds, trimming the shrubbery, and laying new mulch.

Miller said one goal is to eventually install a sign at the front of the house along Shepherd Grade detailing Popodicon’s history. 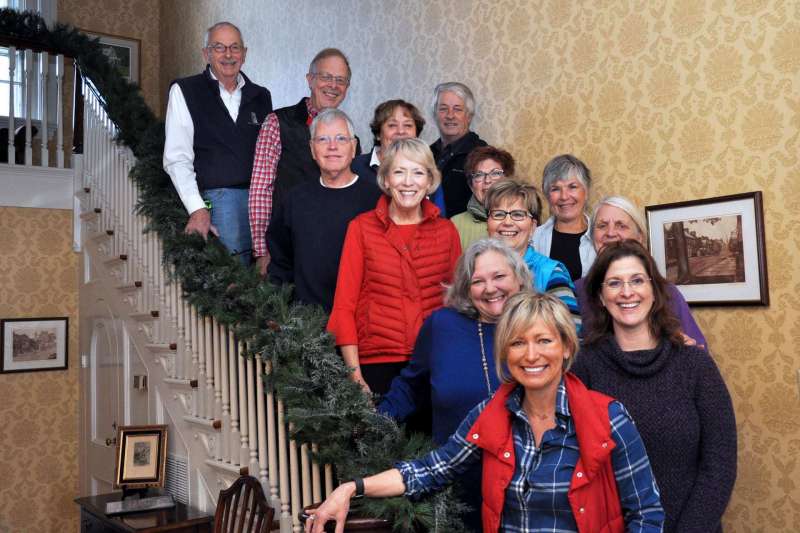