Musical Showcase for Scholarships to be held March 3

SHEPHERDSTOWN, WV — Shepherd University is offering music lovers the opportunity to listen to great piano and vocal music while supporting current and future music students at a Musical Showcase for Scholarships on Friday, March 3, at 8 p.m. in the Frank Center Theater. The evening will include a post-concert reception to meet the performers.

Tickets are $100 and corporate sponsorships are available at the $500, $1,000, $2,500, and $5,000 levels. Proceeds from the concert will go toward helping Shepherd’s Department of Music raise $20,000 to provide scholarships for current and future music students.

The concert will feature Dr. Scott Beard, pianist and dean of Graduate Studies and Continuing Education and associate provost, with special guests and Shepherd alumni Jeff Martin, baritone, and Jason Solounias, pianist. Both Martin and Solounias benefited from music scholarships as undergrads at Shepherd.

“I think we’re going to have some really fun music, and it ends up that the program is going to have a little bit of a Spanish flair to it,” Beard said.

“It’s a very beautiful piece,” Beard said. “You can imagine someone serenading a young lady from the balcony with this beautiful song.”

Martin plans to sing an aria by Giuseppe Verdi.

“It’s one of the great baritone arias about deception and betrayal in a marriage, so it’s very, very dramatic,” Beard said. “He will also sing some beautiful songs by Gerald Finzi, who’s an English composer from earlier in the 20th century.”

A performance by Beard playing Chopin will be featured in the second half of the concert.

“Of course, you can’t have a piano concert without Chopin,” Beard said. “I will be playing all Chopin, with a little bit of the poetic and the virtuosic and the dance mixed in.”

Martin, a native Marylander, recently finished his master’s degree at Peabody Conservatory at Johns Hopkins University. He is currently pursuing his doctorate in vocal performance at the University of Minnesota. Recent concert performances include Mozart’s “Great Mass in C Minor” with Shepherd University’s Masterworks Chorale, and the Peabody Conservatory’s “Defiant Requiem: Verdi at Terezin.” This past summer, Martin performed the role of Raimondo (Lucia di Lammermoor) with La Musica Lirica Festival in Novafeltria, Italy.

Award-winning pianist Solounias has performed across the United States and Europe, ranging from the Kennedy Center to Southwark Cathedral in London. Recent engagements include performances at Steinway Hall, Ward Recital Hall, WETA public television in Washington, D.C., Concerts from Kirkwood Series, and the Lisner Auditorium. He is also a member of the Washington Piano Society. He currently lives in Washington, D.C., and is pursuing his doctoral degree in piano performance at the Catholic University of America.

Beard said the concert offers an opportunity for community members and others who support Shepherd to come together to hear these two graduates and to raise money for others like them.

“One of the greatest needs in the music department is for scholarships so that we can attract the most talented students to our program,” Beard said. “Shepherd is often competing for the best students with other schools in terms of scholarships.”

Dr. Robert Tudor, chair of the Department of Music, added, “Jason Solounias and Jeff Martin are two of many examples of our former music scholarship recipients continuing on to create extraordinary experiences in their careers. We are honored that Dr. Beard and our alumni are offering their talents to help raise scholarship resources to attract tomorrow’s artists and artist-educators.”

For more information and to purchase tickets for the concert, visit www.shepherd.edu/musicshowcase. 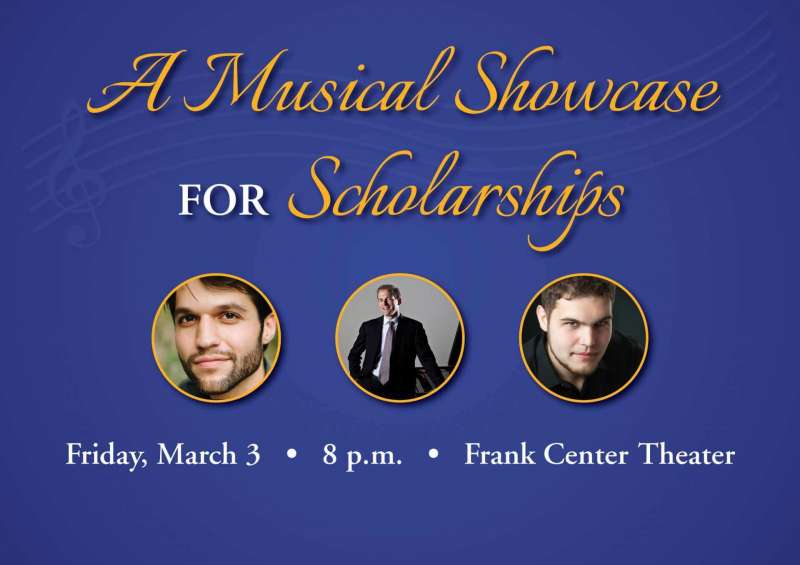