SHEPHERDSTOWN, WV — Shepherd University’s music department presents “Opera Double Feature” on Friday, February 13 and Saturday, February 14, at 8 p.m. in the Frank Center Theater. The classic tragedy “Dido and Aeneas” by Henry Purcell will be directed by Dr. Robert Tudor, associate professor and chair of the Department of Music, and the comedic one-act “La Serva Padrona” by Giovanni Pergolesi will be directed by Dr. Robert Robinson, adjunct voice professor. Dr. Erik Jones, associate professor of music and director of choral activities, will conduct both operas.

“Dido and Aeneas” is English Baroque composer Purcell’s first opera and is based on Book IV of Virgil’s “Aeneid.” It recounts the love of Dido, Queen of Carthage, for the Trojan hero Aeneas, and her despair when he abandons her.

“La serva padrona” (The Servant Turned Mistress) is a comic opera by Italian composer, violinist, and organist Giovanni Battista Pergolesi. The work is only 45 minutes long and was originally performed between the acts of a larger operas.

Tudor brings more than 16 years experience directing opera and musical theater to Shepherd. His credits include “Chess,” “The Apple Tree,” “Ragtime,” “The Gondoliers,” and Shepherd’s productions of “Die Fledermaus” and “Avenue Q.”

Robinson has directed productions in northeast Florida, including “Cosi fan tutte,” “The Telephone,” and Marschner’s “Der Vampyr.” Robinson also conceived and performed “Twentyfour: Italian Songs and Arias for a New Century,” a narrative presentation of 17th- and 18th-century Italian song for voice and percussion ensemble. Recently he co-wrote and performed an original cabaret, “Une soiree a l’Olympia,” presented as part of “Paris on the Potomac,” a Washington, D.C., year-long celebration of French Art and Culture. He has served on the faculties of Stetson University, Jacksonville University, and the University of North Carolina at Chapel Hill.

Jones is in his eighteenth year as founder and artistic director of the Master Singers of Virginia, which won the 2012 Choral Excellence Award for Most Creative Programming. At Shepherd, he directs the Chamber Singers, the Masterworks Chorale, the Women’s Camerata, and the Vocal Jazz Ensemble.

Admission and seating for “Opera Double Feature” is on a first-come, first-served basis, and advance sales or reservations are not available. The box office will open one hour prior to the performances. General admission is $10; $5 for faculty, staff, Shepherd alumni, and senior citizens; and free for Shepherd students with a valid Rambler ID, and Friends of Music gold and silver MAC cardholders. For more information call 304-876-5555 or visit www.shepherd.edu/musicweb. 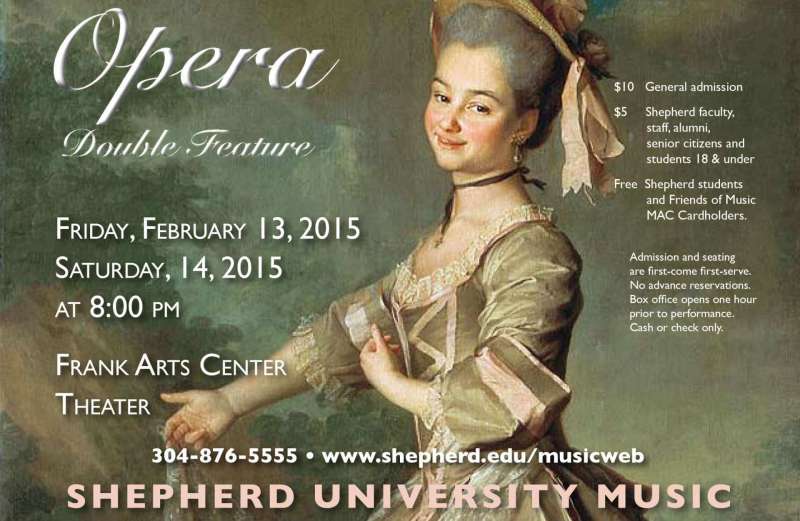 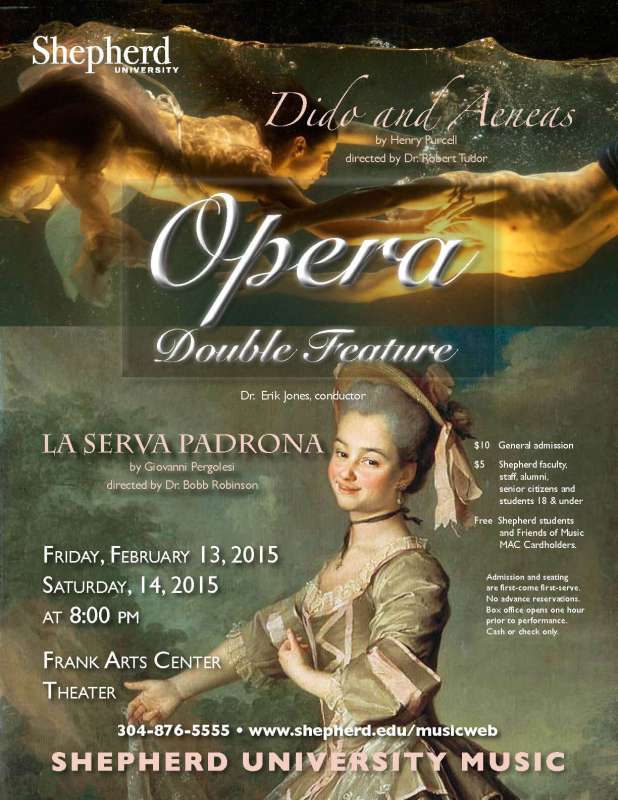