SHEPHERDSTOWN, WV — A Shepherd University professor and several students are involved in multi-state, multi-institutional research to find ways to keep the brown marmorated stink bug from damaging organically grown crops. Dr. Clarissa Mathews, professor of environmental studies and chair of the Institute of Environmental and Physical Sciences, is leading the effort, with research taking place at Shepherd and at her Berkeley County farm.

This is the third year for the research project. Mathews said the project is looking at environmentally benign ways to deal with agricultural damage caused by brown marmorated stink bugs, which made their way from Asia in packing crates and were first discovered in this country in the late 1990s in Allentown, Pennsylvania.

“There’s just zero tolerance for a tomato that has stink bug damage,” she said. “The research will also benefit homeowners and businesses like hotels, where stink bugs are a nuisance pest. They don’t really harm anyone, but folks don’t want to come to a hotel if it has 25 stink bugs in a room.

“If we can keep the pests out of the fields, out of the hotels, out of folks’ homes, it’s going to be really beneficial,” she added.

Mathews and several Shepherd students and alumni are involved in a research project headed by Dr. Anne L. Nielsen at Rutgers University. The goal is to find ways to control the stink bugs without using chemicals. The project involves 13 farms in seven states, 12 universities, a nonprofit organization, and the United States Department of Agriculture (USDA). The grant for the research, titled “Whole-farm Management Strategies for Brown Marmorated Stink Bug,” came from the USDA Agricultural Research Service.

The research locally is taking place in a lab at Shepherd, at two nearby USDA facilities, and at Redbud Farm in Berkeley County, an organic farm operated by Mathews’ husband, alumnus Haroun Hallack. Mathews said the study is looking at what’s called trap cropping—planting a border of crops that are attractive to the stink bug around a cash crop, in this case peppers.

Mathews said there are 12-14 plots planted at the farm that are part of the study. Every week the stink bug densities on the peppers and on the trap crops are assessed. This year the research includes locating a new stink bug pheromone trap developed by the USDA in the trap crop.

“The idea is the stink bugs might see the trap crop, climb on it, and become aware of the pheromone that’s coming out of these traps. We hope they then climb into the trap and are kept permanently out of our agriculture field,” Mathews said. “Inside of that trap is a kill strip with a small amount of insecticide so that we don’t have to apply any insecticide to our fields.”

Students Samuel Woullard, Martinsburg, and McKenzie Allen, Kearneysville, are helping Mathews with the research this summer. Woullard, an English major and environmental science minor, helps maintain the test plots on the farm and collects data. He also works with sentinels, which are masses of stink bug eggs that are attached to the underside of leaves  for 48 hours.

“The idea is to have critters in the environment feed on the egg masses,” Woullard said. “Then we look them over for any damage that happened.”

Allen does most of her work in the lab at Shepherd. She collects predators like katydids, praying mantises, spiders, assassin bugs, and lady beetles. She puts them in jars or vials with a water wick and starves them for 24 hours, then in a container with stink bug nymphs or eggs for another 48 hours to see if they’ll eat the nymphs or eggs.

“We’ll take pretrial photos of the egg mass and then after-trial photos so we can assess any damage after the 48-hour period,” Allen said. “We’ve been having luck finding things that munch.”

Allen is utilizing the EntoVision lab imaging system at Shepherd, which Mathews purchased with a grant she received.

“This is a very specialized microscope computer system that allows you to take photographs of insects in a very useful way and do detailed microscope work,” Mathews said. “One of the biggest portions of this work that’s important right now is getting the photos before we expose egg masses to predators so we can identify the contribution of natural predators in terms of controlling these pests.”

Data from all 13 farms will be sent to Mathews, who will compile the final results.

Aside from Woullard and Allen, current Shepherd students who are participating in the research include Rachel Pierce, Shenandoah Junction; Dyonna Chapman, Clinton, Maryland; Joshua Hypes, Hico; and Brandon Nicolossi and Brittany Poling, both of Knoxville, Maryland. Shepherd alumni who are taking part are Nathan Brandt, biological science aide; and Torri Hancock and John Cullum, both biological sciences technicians. All three work at the USDA Appalachian Fruit Research Station, Kearneysville. 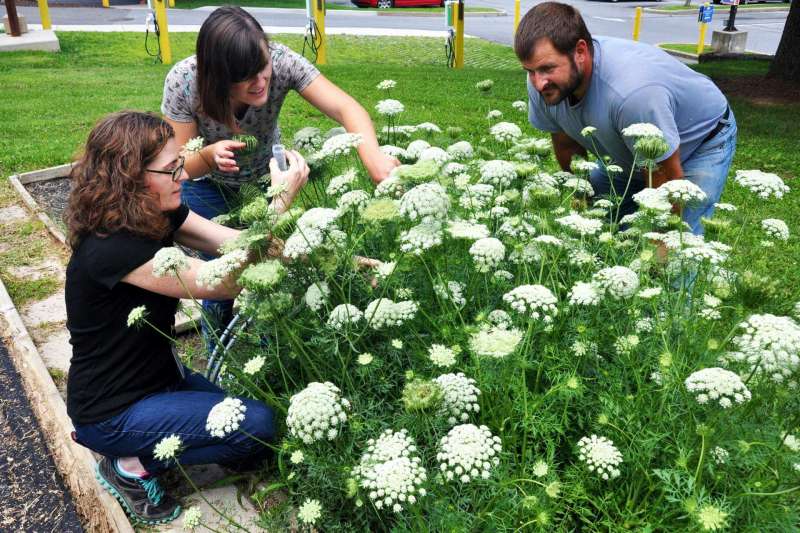 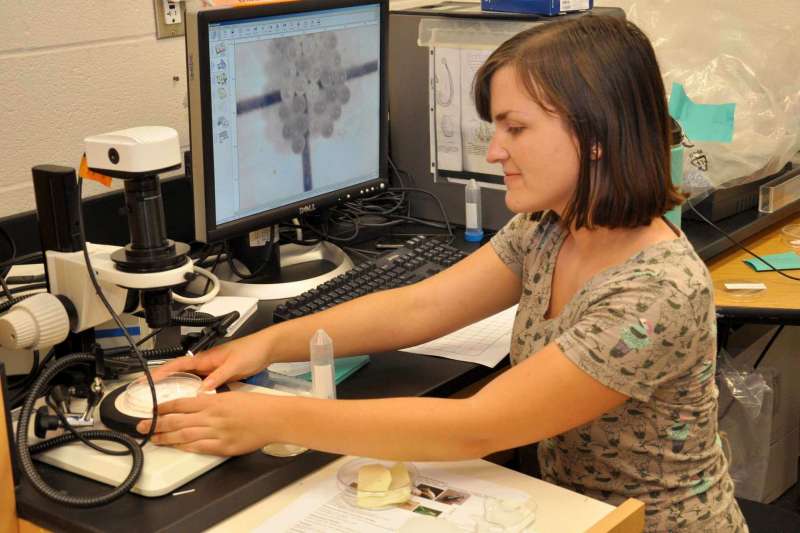