Bach wrote “Mass in B Minor” as a comprehensive thesis on everything he knew about composing music. Each movement represents the best of one particular style of music from the Baroque to the Renaissance periods. It is often considered the greatest work of choral music ever written.

Evers received her master of music from the University of Maryland where she is pursuing her doctorate of musical arts. She received bachelor’s degrees in voice and German from Indiana University. She studied as a Fulbright Scholar in Austria performing in Vienna, Berlin, and Milan. She has performed at the Kennedy Center, the Embassy of Austria, the National Cathedral, the National Shrine, the Strathmore Mansion, Schlesinger Center, and the Chautauqua Institution in New York. She has participated in the Ravinia Festival of Chicago, the Franz-Schubert-Institut in Baden-bei-Wien, and master classes of Elly Ameling, Renee Fleming, Wolfgang Holzmair, and Helmet Deutsch. She toured Germany as a member of Helmut Rilling’s Festival Ensemble Stuttgart. Evers is also a jazz singer and was a semifinalist in the Billie Holiday Competition in Baltimore and performed the role of Maria in the “Sound of Music” with the Vienna Choral Society.

Melanie Regan received her bachelor and master of music degrees in voice from the Peabody Institute of Johns Hopkins University. She is the applied voice instructor at St. James School where she also leads choir sectionals,coaches musicals, and plans choir tours. She is a private music instructor and performs locally and throughout the eastern U.S.

Joseph Regan received his bachelor and master of music degrees from the Peabody Institute of Johns Hopkins University and is pursuing his doctorate of musical arts at the University of Maryland. He is a singer and voice teacher who has performed all over the eastern seaboard. He has performed in operas, musical theater, and cabaret and recital programs. He is also known for his oratorio work. He is an ensemble singer and sings regularly with the Washington National Cathedral and the Countertop Ensemble.

Tudor received his doctorate in musical arts degree in voice performance from the University of Maryland, College Park, a master of music degree from the University of Miami, and a bachelor of music from Stetson University. He has performed opera, musical theater, cabaret, and concert works throughout the United States. He is a regular guest artist with the Montana Early Music Festival and artist and instructor at the annual Helena Choral Festival in Helena, Montana. His awards include a 2003 Individual Artist Award from the Maryland Sate Arts Council, 2004 Artist of the Year from Opera Theatre of Northern Virginia, and 2009 Award for Excellence from Jacksonville University.

The Masterworks Chorale is a vocal ensemble comprised of more than 130 vocal students and community members. It presents two full-length productions of great masterpieces from the choral literature every year, as well as appearances at Shepherd’s annual Holiday Gala Concert. 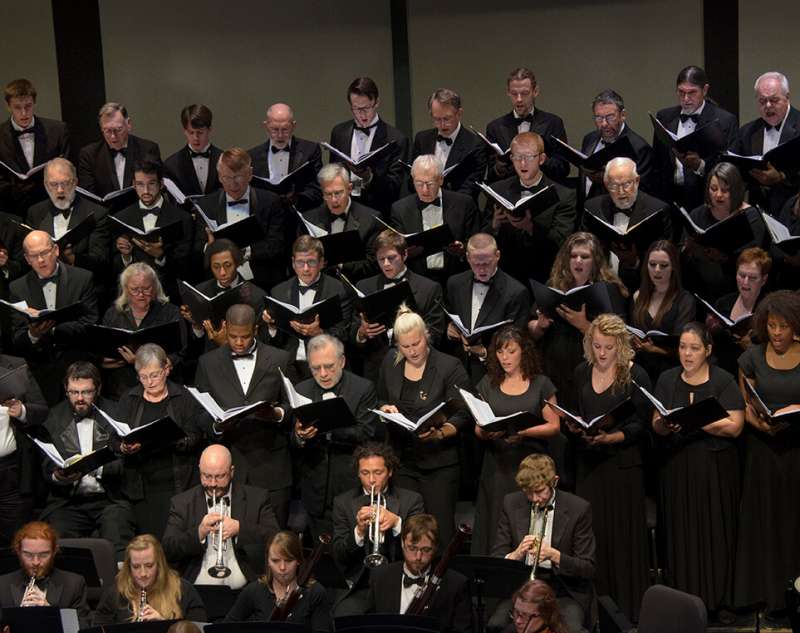