SHEPHERDSTOWN, WV — Shepherd University’s Masterworks Chorale, under the direction of Dr. Rachel Carlson, will present the Brahms Romantic masterpiece “Eine Deutsches Requiem,” on Saturday, April 22, at 8 p.m. in the Frank Center Theater. This production will feature a full orchestra and Shepherd University voice faculty soloists soprano Brooke Evers-Moore and baritone Dr. Rob Tudor. A pre-concert lecture by Dr. Edward Maclary, professor of music and director of choral activities at the University of Maryland, will take place at 7:15 p.m.

General admission is $15; $10 for faculty, staff, Shepherd alumni, senior citizens, and students 18 and under; and free for Shepherd students with a valid Rambler ID. Admission and seating is first-come, first-served, and there are no advance sales or reservations. The box office opens one hour prior to performance.

Evers-Moore, a Shepherd adjunct music professor, studied as a Fulbright Scholar in Austria, performing in Vienna, Berlin, and Milan before returning to Washington, D.C., where she has been heard as a soloist at the Kennedy Center, the Embassy of Austria, the National Cathedral, the National Shrine, the Strathmore Mansion, Schlesinger Center, and the Chautauqua Institution in New York. A winner of the Vocal Arts Discovery Series Competition and the Baltimore Music Club Recital Competition, Evers-Moore has also been a finalist in the American Bach Competition and Liederkranz Competition. She has been a semifinalist in the Louisville Bach Society Competition and New York Oratorio Society Competition. She was awarded second prize in the Russel C. Wonderlic Competition and the David Gundlach Lied Prize in the Lotte Lehmann Foundation Art Song Competition. Evers-Moore has appeared as a soloist and a member of the Washington Bach Consort and has performed with Opera Lafayette in productions of “Armide,” “Acis and Galatea,” and “Le Roi et le Fermier.” Her solo engagements have included “Elijah,” Requiems by Brahms, Mozart, and Faure, Handel’s “Messiah” and “The Creation,” and the Bach “St. John Passion and B Minor Mass.” She has participated in the Ravinia Festival of Chicago, the Franz-Schubert-Institut in Austria, and has toured Germany as a member of Helmut Rilling’s Festival Ensemble Stuttgart.

Tudor, chair of Shepherd’s Department of Music, has worked as a professional singer, educator, and nonprofit executive, including leadership positions at Jacksonville University, the Florida International Festival, the Association of Boarding Schools, American Classic Voyages, and Levine School of Music. The Washington Post has praised Tudor for his “powerful singing voice and notable acting skills.” He has performed opera, musical theater, cabaret, and concert works throughout the United States. Awards include a 2003 individual artist award from the Maryland State Arts Council, 2004 artist of the year from Opera Theatre of Northern Virginia, and a 2009 institutional award for excellence from Jacksonville University.

Carlson, assistant professor of music, is director of choral activities at Shepherd and conductor of the university Chamber Singers, Women’s Camerata, and Masterworks Chorale. Carlson founded and serves as artistic director of Six Degree Singers, a community choir based in Silver Spring, Maryland, and serves as assistant conductor of the Washington Master Chorale. In 2014, Carlson was nominated for a Wammie (Washington Area Music Award) for best classical conductor/director. Carlson has toured extensively with professional choirs across the country, appearing as a soprano soloist with the Washington Master Chorale, Washington Bach Consort, Santa Fe Desert Chorale, Oregon Bach Festival, True Concord Voices and Orchestra, Vox Humana, and Washington Revels and as a professional choral singer with Conspirare and the Manhattan Chorale.

Maclary has been director of the master class in conducting at the Oregon Bach Festival since 2014, has served as the artist in residence for the Eastman School of Music Summer Choral Institute, and taught conducting master classes at Indiana University, Westminster Choir College, the University of Wisconsin, and Temple University. Maclary maintains an active schedule as a guest conductor for choral festivals and honors choirs around the country. In 2016 he will conduct the California All-State Choir, and he has been invited to lead the Maryland All-State Choir in 2018.

The Masterworks Chorale is a vocal ensemble with more than 100 members, including vocal students from Shepherd University and members from the surrounding community. The group presents two full-length concerts per year of great masterpieces from the choral literature. 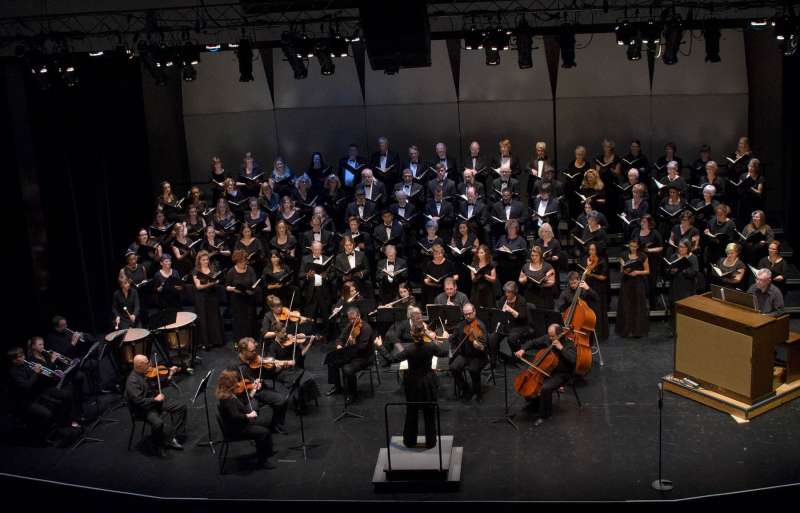