SHEPHERDSTOWN, WV — Shepherd University will host the ambassador from Liberia on Wednesday, December 2. Jeremiah Sulunteh will give a lecture from 6-7:15 p.m. in the Erma Ora Byrd Hall Auditorium and will attend a cultural presentation from 8-10 p.m. in the Student Center Storer Ballroom. Both events are free and open to the public.

Sulunteh has served as Liberia’s ambassador to the United States since 2012. Prior to that, he served as Minister of Labor, Minister of Post and Telecommunications, and Minister of Transportation. Sulunteh has also taught economics at the University of Liberia and the Cuttington University.

Liberia is a northwestern African country on the Atlantic coast that borders Sierra Leone, Cote d’Ivoire, and Guinea. It has a population of 4.5 million people and is predominantly Christian. In the 1980s, 1990s, and early 2000s the political landscape in Liberia changed as coups, unrest, and civil war ensued. A peace accord was reached in 2003, and in 2006 Ellen Johnson Sirleaf was elected president. Sirleaf is Liberia’s first female president and Africa’s first female head of state.

“We use these opportunities to invite foreign dignitaries to share their knowledge of their home countries and also to experience our own campus and culture,” said Dr. Joe Robbins, associate professor of political science and Pi Sigma Alpha advisor. “Ambassador Sulunteh’s remarks will likely touch on the fact that Liberia is home to Africa’s first female head of state, the country’s response to the Ebola epidemic, along with discussion of the country’s current political environment.” 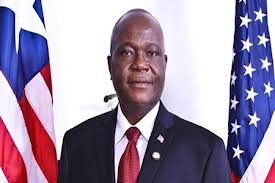