Hareem Salman is enjoying a semester as exchange student

SHEPHERDSTOWN, WV — A Shepherd University exchange student from Pakistan is spending this semester getting a first hand look at how the education system in the United States works. Hareem Salman, a 21-year-old social development and policy major from the Habib University in Karachi, came to Shepherd through the U.S. Department of State’s Global Undergraduate Exchange Program in Pakistan (Global UGRAD-Pakistan).

Salman is spending her semester at Shepherd studying education. Aside from taking college courses, she tutors students at Job Corps and observes classes at Shepherdstown Elementary School.

“I feel like getting hands-on experience by going to the elementary school and teaching at Job Corps has been really eye-opening for me,” Salman said. “If I was just studying education theoretically, I wouldn’t have the same insight into the American education system as I do now. I think that’s my favorite part of being here.”

Salman said she especially enjoys the time she spends at the elementary school because it gives her the opportunity to interact with the children.

“It’s a lot of fun,” she said. “They keep asking questions about my country. I’m planning to do a small activity or fun presentation for them about Pakistan.”

Salman plans to utilize the knowledge she’s gaining about education in a children’s program she started in Karachi to teach students to think critically and incorporate lessons about some of the biggest problems afflicting Pakistani society.
“I started my work with teaching kids who lived in a slum settlement near my house, where families were too poor to afford an education for their children,” Salman said. “In the summers of 2011 and 2012, I started a camp to teach them basic literacy skills. I’ve always thought that education was one of the best ways to change a community.”

Using books she got from some schools, Salman made her own course plans. But she noticed the books were not student-centered and didn’t offer very appealing or educational content.

“For example, far from addressing the issue of gender inequality, they instead served to silently reinforce the pre-existing biases in society regarding the issue,” Salman said. “There were pictures in the books where the woman is cooking and the man is working outside. It just reiterated the idea that women belong in the home and men are supposed to work outside.

“On a separate note, books in the English language were imported from abroad and featured content that was entirely foreign to the children,” she added. “There were stories that involved terms like ‘dressers’ and ‘stockings’ that children in this town had never even seen in their lives. This just made it very hard for them to relate to the books.”

Salman believes educational content should be interesting and relatable to the children, while at the same time give them awareness about key issues of the community from an early age so they develop a proactive mindset.

In the summer of 2015, Salman and her team conducted a summer program at a charity-run school, Khadija Kazi Memorial School, which allowed them to be innovative in designing their own month long curriculum. Through this context-based curriculum, they tried to spread awareness about key issues in Pakistani society.

Salman sees her summer program as a way to teach children critical thinking, expose them to new viewpoints, and address issues like intolerance for people with different beliefs, cultural, and religious backgrounds.
“I tried to develop my curriculum to focus less on literacy and more on things like community building, gender equality, tolerance for religious differences, taking responsibility for the well-being of the community and the environment, respecting public spaces, and acceptance of diversity,” Salman said. “It was also more activity-based rather than book-oriented in order to keep children interested and engaged. For that, I looked up resources online and a lot of them were from U.S. websites.”

When Salman was accepted into the Global UGRAD-Pakistan program, she decided to take classes in education rather than in her college major to get ideas to improve her summer program, which she hopes to expand. She wishes to eventually create a model curriculum addressing these core issues, which schools can incorporate into their regular year-round syllabi. She also plans to keep open the communication with Shepherd’s Department of Education after she returns to Pakistan in late April.

“I feel like I met a lot of good people in the education department and I really do hope I can stay in touch with them when I go back,” she said. “I am considering building collaboration so we can exchange course materials.”

While Salman enjoys the classroom experience she’s getting here, her ultimate goal does not involve teaching. The degree she’s earning in Pakistan will lead to a job in policy making.

“I want to really change policies around education because I feel like that’s the biggest problem—it’s not just the number of people who are being educated but the kind of education that’s being given to them,” she said. “I feel it’s very important to bring about changes in how education is delivered—the curriculum, the pedagogy, all of that.”

Salman is enjoying her time at Shepherd and likes Shepherdstown, which she describes as quaint.

“The people are generally very warm and welcoming and even though it’s a small town, there is a lot to do here,” Salman said. “Not only have I made some good friends on campus, I have also made some wonderful friends who are not students, but are part of the larger community. This is probably the first time I have made friends with people who are not in the same age group as mine, and it is a very rewarding experience.”

Salman said she is also enjoying what this area offers in terms of outdoor activities. She has taken advantage of opportunities to hike and ride bikes at the C&O Canal, Antietam National Battlefield, and Harpers Ferry. She visited Washington, D.C., to see the cherry blossom trees and plans to go kayaking on the river.

“I adore natural beauty and enjoy being outdoors, and Shepherdstown is a perfect place for that,” Salman said. “I especially love the spring here and the colorful birds and flowers that come with it.”

Salman said college life is a bit different in the United States. The course load and style of teaching are similar, but a U.S. college education offers more opportunity for community engagement and social activities. She has taken advantage of that opportunity by joining the coeducational service fraternity Alpha Phi Omega.

“I think that’s a very U.S. thing because we don’t have fraternities and sororities back home, or any kind of Greek life,” she said. “So far I’ve enjoyed that because I’ve found some good people who, in many ways, think the same way as I do.” 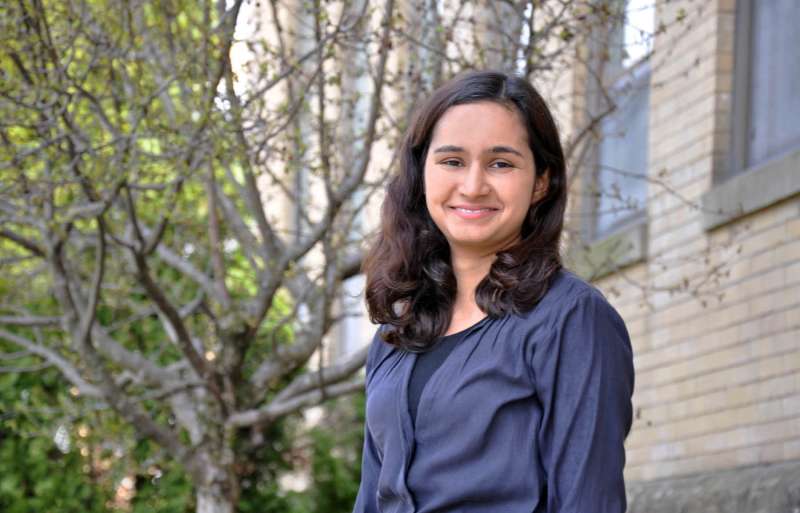