Four to be honored during the 143rd commencement May 7

Honorary doctorate recipients include commencement speaker James A. Leach, who will receive a Doctor of Laws honorary degree, and W. Randy Smith, of Berkeley County, who will receive a Doctor of Humane Letters honorary degree. President’s Award recipients will include Sylvia Manning, who served as interim president at Shepherd University, and her husband, Thomas Blondell.

Leach is a former 15-term Iowa congressman who currently serves as Chair in Public Affairs, Visiting Professor of Law, and Senior Scholar at the University of Iowa College of Law. Leach also is the former chair of the National Endowment for the Humanities.

Berkeley County resident W. Randy Smith is a philanthropist who has distributed more than $5 million to the Eastern West Virginia Community Foundation to create the W. Randy Smith Family Fund that has funneled assistance to more than 30 nonprofit schools, government entities, and other community assistance programs. Smith was named the Philanthropist of the Year in 2012 by the Tri-State Chapter of the Association of Fundraising Professionals. The $2.1 million W. Randy Smith Recreation Center in Inwood was funded and named in his honor. Smith served as sheriff of Berkeley County from 2001 to 2009.

Sylvia Manning and Thomas Blondell, of Chicago, Illinois, are the recipients of the President’s Award in recognition of their contributions to Shepherd University during the time that Manning served as interim president from August 2015 to February 2016. Before accepting the interim president post, Manning had served as the president of the Higher Learning Commission, the accrediting body for colleges and universities in 19 states, including Shepherd. After military service, Blondell did logistical work abroad. He has extensive experience in global risk management, on which he has advised domestic and foreign governments. Both became avid fans of Shepherd Rams athletics.

Shepherd University’s 143rd Commencement ceremony will take place Saturday, May 7 in the Butcher Center. Admission is by ticket only.

Other events leading up to the graduation ceremony include: 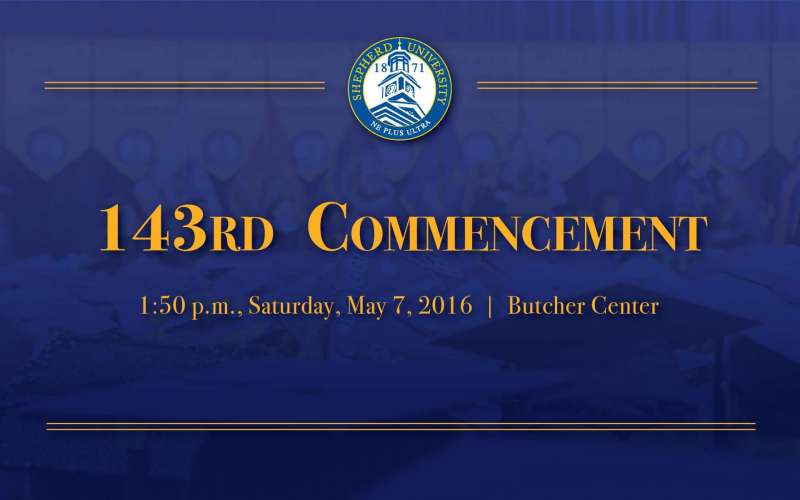