SHEPHERDSTOWN, WV — Shepherd University President Mary J.C. Hendrix and the Shepherd University Foundation hosted the biennial reception for donors and scholars on Sunday, November 5, in the Erma Ora Byrd Hall atrium. Student scholarship and faculty excellence award recipients, their family and friends, prominent faculty and staff members, representatives from university leadership boards, and Shepherd alumni and friends who have established awards were among the 250 guests at the event.

“We were blessed with parents who saw the importance of education and taught us good values, a tireless work ethic, and a strong faith,” said Newlin. “But it was Shepherd University and the Foundation which allowed those human qualities to bloom and reach their potential.”

Tamia Hardy, a 2017 business administration graduate from Martinsburg and the current Miss West Virginia, offered her gratitude to Shepherd for the opportunities her many Foundation scholarships afforded her. A leader in and out of the classroom, Hardy served as a member of the Black Student Union, A-team, Fellowship of Christian Athletes, Multicultural Leadership Team, and as a student ambassador in admissions along with receiving several privately funded awards.

Myles Humphrey, a senior recreation and sport studies major from Clinton, Maryland, offered his own gratitude to the generosity of donors who continually give their financial support to fund private awards such as the Florence and Velma Shaw Memorial Scholarship and the Shepherd Fund Scholarship, both of which he has received.

“On behalf of all the students here, I want to offer my sincere appreciation to those who donate to scholarships,” said Humphrey, who serves as a captain of the nationally ranked Shepherd University football team and was elected as a second team member of the 2016 All-Academic Division II squad. “You don’t have to give and yet you do. Thank you.”

Grace Guiney, a senior secondary education major from Harpers Ferry sang “Shall We Gather at the River” from the Aaron Copland Old American Songbook before Tamia Hardy returned to perform a lyrical dance number to Audra Day’s “Rise Up.”

Following the two performances, Shepherd University Foundation Executive Vice President Monica Lingenfelter congratulated the student scholars in attendance for their achievement of successfully competing for privately funded Foundation awards. Lingenfelter reminded them that though they should feel pride in that success, they should also feel a responsibility to one day “pay it forward” to future generations.

More than 500 endowed and annually funded scholarship and faculty excellence awards are provided through the Foundation. If you would like to learn more about creating an award, or would like to donate to an existing fund, contact Monica Lingenfelter, Shepherd University Foundation at P.O. Box 5000, Shepherdstown, WV 25443, 304-876-5397, mlingenf@shepherd.edu, or by visiting us at www.shepherduniversityfoundation.org. 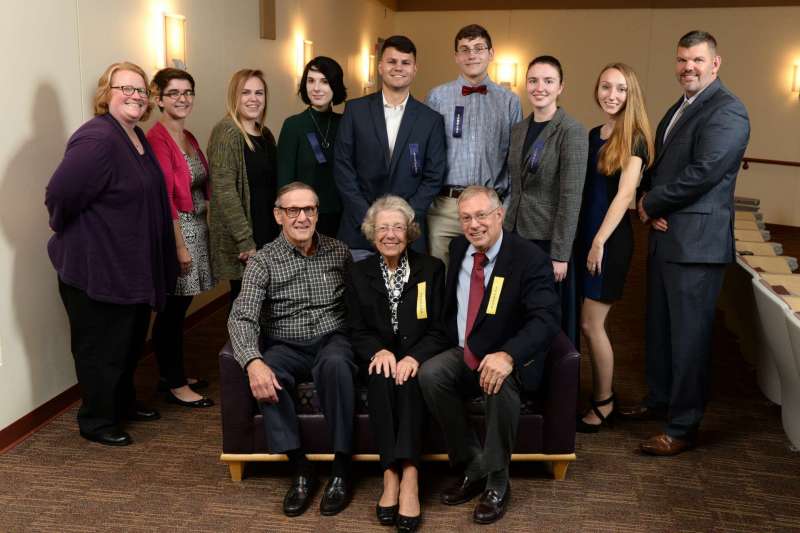