SHEPHERDSTOWN, WV — Shepherd’s football team is getting behind the university’s campaign to encourage bystander intervention and stop interpersonal violence. During Saturday’s game against West Liberty, Shepherd football players will wear neon green socks, which is the color signifying the anti-violence campaign.

The first 400 students attending the game will receive a free neon green “Stand Up, Don’t Stand By” bracelet, and any student who wears neon green (including the bracelets) or who brings a “Stand Up, Don’t Stand By” or 3D Direct, Distract, Delegate” sign will be entered in a drawing at halftime to win a set of Beats headphones. Before the game B.J. Pumroy, director of athletics, will read  information about the importance of bystander intervention to prevent interpersonal violence on campus.

Rhonda Jackson, counselor, said this is the first time a football game will have a “Stand Up, Don’t Stand By” theme. Jackson said both the women’s and men’s basketball teams participated in the program last fall.

“Our hope is to keep spreading the word to our students about bystander intervention, how important it is to recognize interpersonal violence and when others are in need of our help, and to also offer them strategies for intervening,” Jackson said.

Jackson hopes non-students who attend the game will become part of the conversation about ending interpersonal violence on Shepherd’s campus and in the community.

“We hope those who aren’t students will ask questions and want to understand more about this issue and how they can intervene,” Jackson said. “We also hope they will see that our students are part of the solution.”

The event is a collaboration between the “Stand Up, Don’t Stand By” committee, Shepherd athletics, and the Bavarian Inn. The campaign was also a class project for the Campus Recreation and Event Management class taught by Keith Worrell, adjunct faculty and First-Year Experience professor. 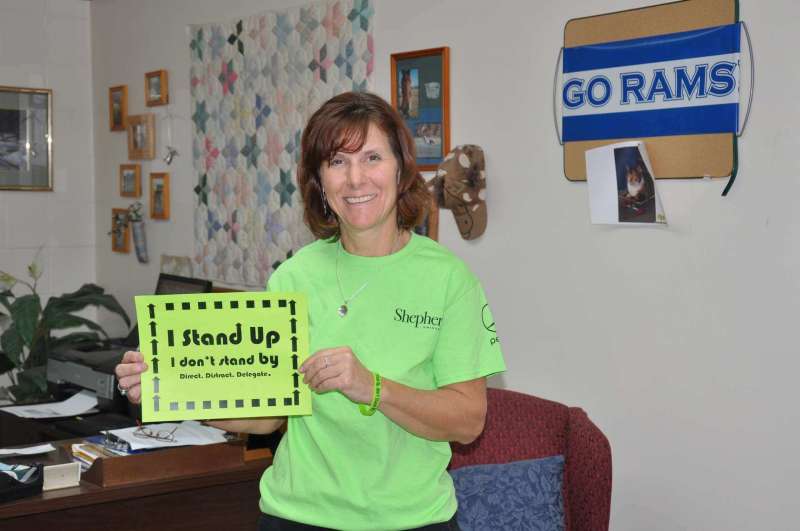