SHEPHERDSTOWN, WV — This year’s Nobel prizes will be the topic of the next Shepherd University President’s Lecture Series event. Six Shepherd professors will discuss the importance of these Nobel Laureates’ works, the nature of the prize in that discipline, the past recipients, and the impact it has on the world. The event, which is free and open to the public, will take place Monday, October 17 from 6:30-8 p.m. at the Robert C. Byrd Center for Congressional History and Education auditorium.

Dr. Kathy Reid, professor of economics and chair of the Department of Economics and Finance, will talk about the winners of the Sveriges Riksbank Prize in Economic Sciences. The prize was awarded jointly this year to Oliver Hart, Harvard University, and Bengt Holmström, Massachusetts Institute of Technology, for their contributions to contract theory.

Dr. Carol Plautz, associate professor of biology, will discuss the winner of the Nobel Prize in Physiology or Medicine, which was awarded this year to Yoshinori Ohsumi, Tokyo Institute of Technology, for his discoveries of mechanisms for autophagy.

Dr. Joe Robbins, associate professor of political science and chair of the Department of Political Science, will talk about the Nobel Peace Prize winner, President Juan Manuel Santos of Columbia, who won the award for his efforts to bring the country’s more than 50-year-long civil war to an end.

Dr. Dan DiLella, professor of chemistry and chair of the Department of Chemistry, will discuss the Nobel Prize in Chemistry winners, Jean-Pierre Sauvage, University of Strasbourg, Sir J. Fraser Stoddart, Northwestern University, and Bernard L. Feringa, University of Groningen. They were awarded the prize for the design and synthesis of molecular machines.

Dr. Jim Lewin, professor of English, will discuss the winner of the Nobel Prize in Literature, singer-songwriter Bob Dylan. He won the prize for having created new poetic expressions within the great American song tradition.

Since 1901, the Nobel Prize has been honoring men and women from all corners of the globe for outstanding achievements in physics, chemistry, physiology or medicine, literature, and for work in peace. The foundations for the prize were laid in 1895 when Alfred Nobel wrote his last will, leaving much of his wealth to the establishment of the Nobel Prize. 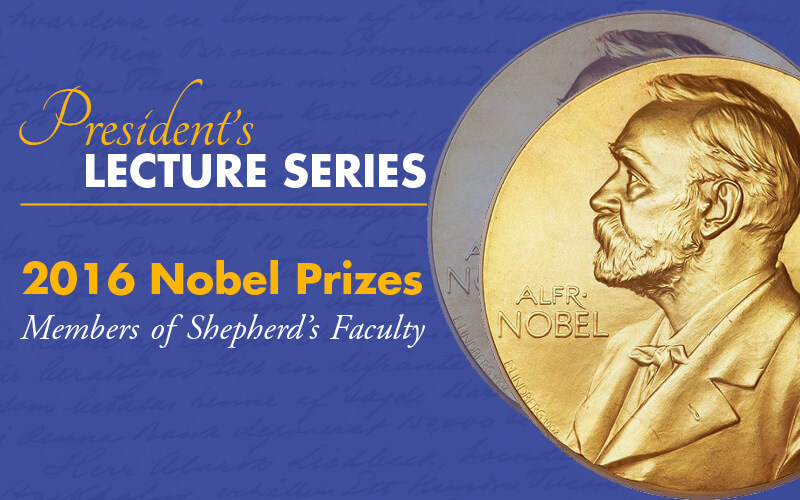