SHEPHERDSTOWN, WV — Seven Shepherd University students and three faculty members helped with a recent forum at Camp Hill-Wesley United Methodist Church in Harpers Ferry on the area’s opioid problem. Six nursing students and one psychology student served as facilitators for the forum, which was sponsored by a group called In Pursuit of Happiness Harpers Ferry.

About 50 people attended the event, which used a process of civic engagement promoted by the Kettering Foundation called community deliberative discussion to explore solutions to the area’s opioid problem.

“We had recovering addicts, parents who lost children to addiction, health professionals, and people there from a variety of professions and for a variety of reasons, but who have all been touched by the opioid epidemic in some way,” said Dr. Heidi Dobish, associate professor of psychology and Kettering Foundation liaison.

Dr. David Didden, Jefferson County’s health officer, gave a brief overview of the epidemic from a health and epidemiological perspective, followed by a dialogue that led to several options, including expansion of education to include telling parents that injured children may get addicted to painkillers, releasing fewer violent criminals from jails, and using sterile needle exchanges as a venue for educating drug users.

“It is critical for the community to have open dialog in order to confront this opioid epidemic,” Mailey said. “Having Shepherd students involved helps them to be better prepared for the workforce that is on the frontline working with these problems.” 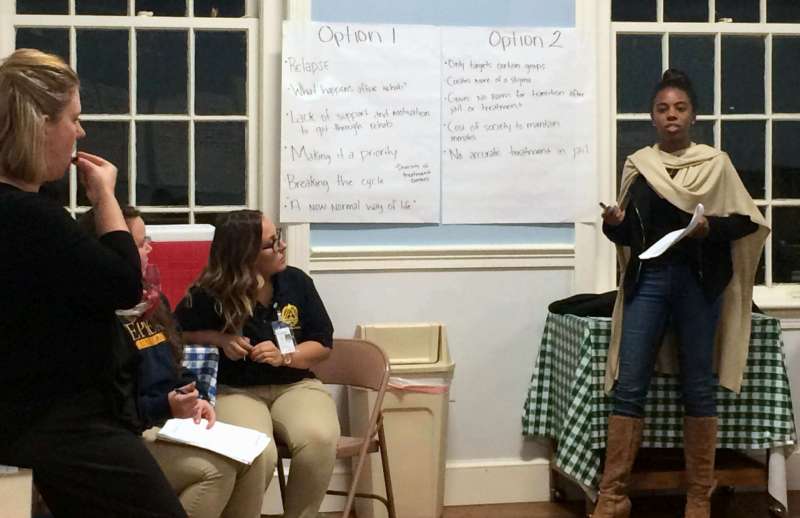