SHEPHERDSTOWN, WV — Every fall Shepherd University welcomes hundreds of new students who have to learn their way around the campus, but for one of this year’s new arrivals the experience is an even bigger adventure than normal.

Balkis Azzez, 19, is attending Shepherd through the U.S. Department of State’s Thomas Jefferson Scholarship Program for Tunisian undergraduate students. The program offers Tunisian college students the opportunity to study one year at a U.S. college. The goal is to foster a deeper understanding of American culture and give the students globally applicable skills and expertise that will help them contribute to Tunisia’s economic growth. There were more than 1,000 applicants to the program, and only 103 were chosen to study in the U.S.

Tunisia is a North African country located along the Mediterranean Sea. Azzez said it’s a culturally diverse country because, while it’s part of Africa, there are also strong Arab and European influences. Tunisians usually speak many languages, and Azzez speaks Arabic, French, Spanish, and English. The Arab Spring movement, a series of demonstrations, protests, and conflicts that swept across Arab League countries in 2010, started in Tunisia.

“It was called the Jasmine Revolution because it was one of the most peaceful revolutions around the world,” Azzez said. “It took only one month with street demonstrations and civil resistance to go through democratization and to have the democratic elections we had been dreaming of.”

Azzez is from the resort city of Monastir and attends the Institute of Advanced Business Studies of Carthage, where she majors in economics. Azzez had not heard of Shepherd before she was accepted as a student, so before she arrived she did some online research to learn about the university and the area.

Azzez arrived at Shepherd on August 16. She is living on campus and is taking some economics-related courses. During the spring semester she will do an internship. Azzez is also using the opportunity to enroll in classes like drama and the fundamentals of speech that she would not normally get to take at her university in Tunisia.

“Since childhood I’ve always dreamed of improving my oratory skills,” she said. “I love my (speech) class because we have a lot of speech assignments and the reading is really good.”

Azzez said she has never been on stage before, so this gives her an opportunity to learn how plays are produced.

“I took for the first semester a minor role as a servant because English is my third language and I wanted to improve it before going on stage,” Azzez said. “I am also helping backstage.”

Azzez said she applied to the Thomas Jefferson Scholarship Program to “gain experience abroad, learn about American culture, and to improve her educational, professional, and leadership skills.” Azzez expresses admiration for what she views as the American spirit of community service and plans to participate in volunteer activities while she’s here. And she enjoys learning more about what it’s like to be an American student.

Azzez is keeping a journal of her experiences at Shepherd, and every night she writes down what she did for the day.

“I’m really inspired whenever someone says a sentence to me, whenever I see something, or whenever my professors tell something that is different from home,” she said. “Whenever I go to see a place that is different from home, I just write it down in that journal. I think for every detail that you like in your life you should really take a picture of it or write it down because this way it’s going to last forever.”

This is the second experience studying in the United States for Azzez. She participated in the two-week Young Global Scholars Program at Yale University in 2013. Her long-term goal is to attend graduate school, work in business and finance, and eventually have her own business.

Listen to the interview with Balkis Azzez HERE. 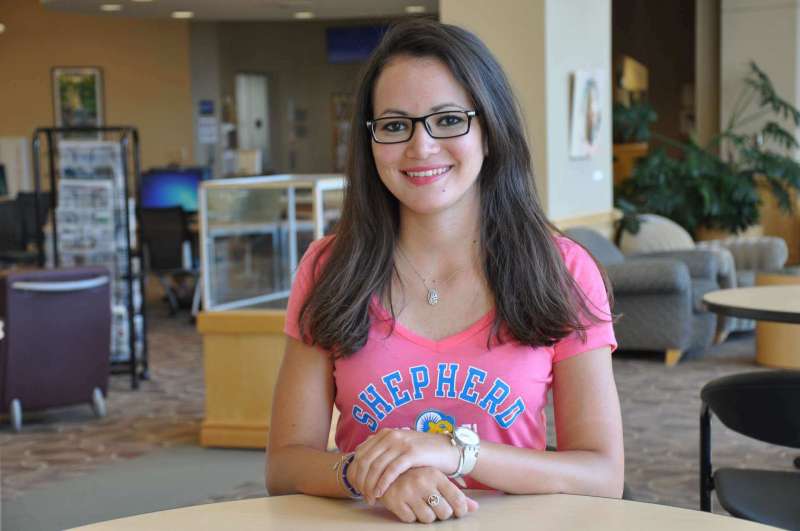