SHEPHERDSTOWN, WV — Paul T. McDermott, president and chief executive officer of the Washington Real Estate Investment Trust in Washington, D.C., and Dr. Paul Welch, a physician/nephrologist caring for patients in Berkeley and Jefferson counties and president of the medical staff at Berkeley Medical Center in Martinsburg, will deliver the commencement addresses during Shepherd University’s 145th Commencement on Saturday, May 5.

McDermott, who will deliver the undergraduate address at 1:50 p.m. in the Butcher Center, will be awarded a Doctor of Business honorary degree during the ceremony. The Friends of Popodicon, a volunteer group working to bring Popodicon and its gardens back to their original grandeur, will be awarded the President’s Award.

Welch, who will deliver the commencement address to master’s and doctoral degree candidates at 11 a.m. in the Frank Center, will receive a Doctor of Science honorary degree during the ceremony. This marks the first year that Shepherd will award doctoral degrees to the inaugural class of the Doctor of Nursing Practice.

Since 2013, Shepherd University alumnus Paul T. McDermott has been president and chief executive officer of the Washington Real Estate Investment Trust in Washington, D.C. He pioneered a comprehensive transformation of the company that included a relocation of its corporate headquarters, a successful rebranding, and an increased share value.

McDermott earned a Bachelor of Science in business administration from Shepherd in 1983 and an M.B.A. in finance from American University in 1989. A member of the Shepherd swim team and a two-time All American, McDermott has served as a swim coach for the Montgomery County, Maryland, Special Olympics. He has also served on the board of directors of Children’s Hospital Children’s Research Institute. Current and previous memberships include the International Development Research Council, Mortgage Bankers Association, Urban Land Institute, the Economics Club of Washington, Federal City Council, and National Association of Office and Industrial Parks.

A Shepherdstown resident, Dr. Paul Welch provided the initial funding to support the development of Shepherd University’s first doctoral program, the Doctor of Nursing Practice (D.N.P.). In recognition of his work in helping to establish the doctoral program, Welch was the invited speaker for the inaugural White Coat Ceremony for Shepherd’s first class of D.N.P. students and has been invited to return to Shepherd as the graduate commencement speaker for the first D.N.P. graduates.

Welch, and his wife, Lisa, have been strong and enthusiastic supporters of Shepherd. In 2013, they established the Shepherd University Distinguished Awards Program, which identifies and mentors students and faculty interested in applying for prestigious national and international fellowships and scholarships. Seeking to engage the community in the intellectual life of the university, the couple established the Paul and Lisa Welch Endowment, which provides annual grants to support cultural programming on campus. As patrons of Shepherd’s Contemporary American Theater Festival, the Welches co-commissioned the CATF world premiere of the play “H2O” in 2013 and co-sponsored the play “On Clover Road,” which had its CATF world premiere in 2015. The Welches were honored by Shepherd University in 2015 when they received the President’s Award for their support of and service to the university.

After a 25-year career in the U.S. Army, Dr. Welch retired in 2004 as a colonel. He earned a B.A. in biology from the University of Tennessee at Chattanooga and a Master of Public Health and an M.D. from the Uniformed Services University of the Health Sciences.

The Friends of Popodicon group was formed in 2017 to bring the house and gardens, located on the Shepherd campus, back to their former beauty. The all-volunteer group is led by interior decorator John Miller and gardener Elisabeth Staro. Members work together to provide artistic planning, labor, and skills.

The Friends of Popodicon committee identifies needs for the interior and looks for pieces that will complement the existing furnishings and works with the Shepherd University Foundation to fundraise for Popodicon improvements. Artwork and furnishings may be loaned or donated through the friends group. 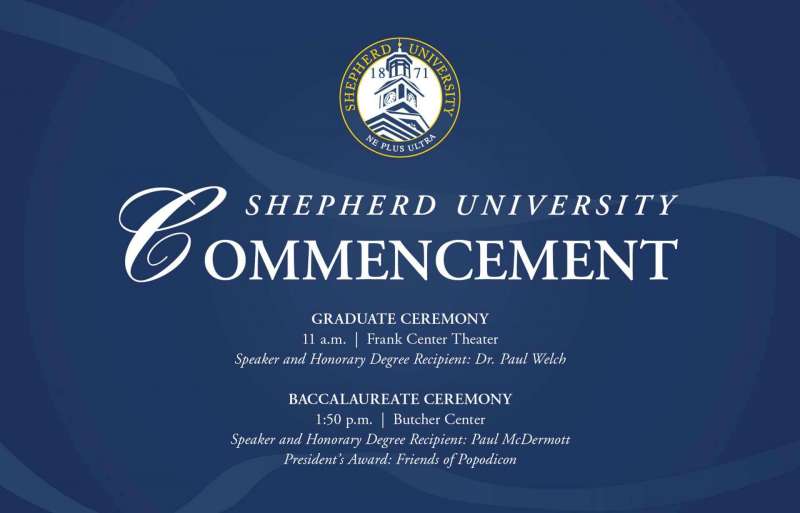