Mathews, the chair of Shepherd’s Institute of Environmental and Physical Sciences, and four Shepherd students and alumni helped conduct the research, which they nicknamed stink bug CSI. Current Shepherd students majoring in environmental studies, McKenzie Allen, from Kearneysville, and Hector Nevarro-Guitz, from Shepherdstown, along with alumni Brittany Poling and Morgan Douglas, worked on the project, which was funded in part by USDA NIFA Organic Research and Extension Initiative.

Brown marmorated stink bugs are native to Asia and a few years ago their population exploded, causing great economic harm to local farmers and orchardists. BMSB were first discovered in this country in the late 1990s in Allentown, Pennsylvania. Initially it appeared there were no natural predators to control the bugs. This study looked at whether predators that are generally found at mid-Atlantic orchards and farms, like katydids, beetles, earwigs, and spiders, will eat stink bug eggs.

“This is the first time for this type of study,” Mathews said. “One of the surprising findings was that there are some natural predators in our local environment that are doing a good job of eating stink bug eggs.”

From May to September in 2014 and 2015, the researchers captured many of the predators at Red Bud Farm in Berkeley County or at the U.S. Department of Agriculture Appalachian Fruit Research Laboratory in Kearneysville. They also obtained some predators from commercial biological control companies.

The predators were given access to only water for one day, and then were placed in a container with a mass of stink bug eggs. Mathews and the students magnified and documented through photography and video whether the predators ate the eggs and how they ate them.

“The most surprising group was the katydid,” Mathews said. “The katydids are really good predators of the eggs. They devoured all the eggs in the egg mass and left no residue behind whatsoever. In fact, sometimes the katydids even ate the card the egg mass had been laid on.”

Mathews said another surprising predator was the jumping spider (Salticidae). They punctured the eggs with their chelicerae, a part on the spider’s mouth that allows it to puncture something and suck out the contents.

“They were not very efficient though,” Mathews said. “They had to do this over a long period of time, so they were not good predators like the katydids. They could not attack all 28 eggs, for instance.”

“Ground beetles are ubiquitous in agricultural fields, so that was a good indicator that we have another species or group of insects that could be helping in the fields,” she said.

Earwigs (Order Dermaptera) seemed to enjoy dining on stink bug eggs. Mathews said earwigs started eating at the top of the egg and chewed around it. The interior would be gone when they were finished but the shell remained.

“Over time gradually we started to see patterns,” she said. “After many, many replicates with each type of predator, these patterns started to emerge so that we could see a damage pattern and then link that to a predator.”

Mathews hopes the takeaway from the study is that there are naturally occurring predators that are helping farmers and orchardists keep stink bugs under control causing less damage to their crops.

“We shouldn’t underestimate the benefits of some of our predators that are out there in the agricultural system,” Mathews said. “Although they aren’t keeping the stink bugs totally under control, they are contributing. So we need to be careful to help our predators and not harm them by doing things like spraying pesticides when they’re not necessary.” 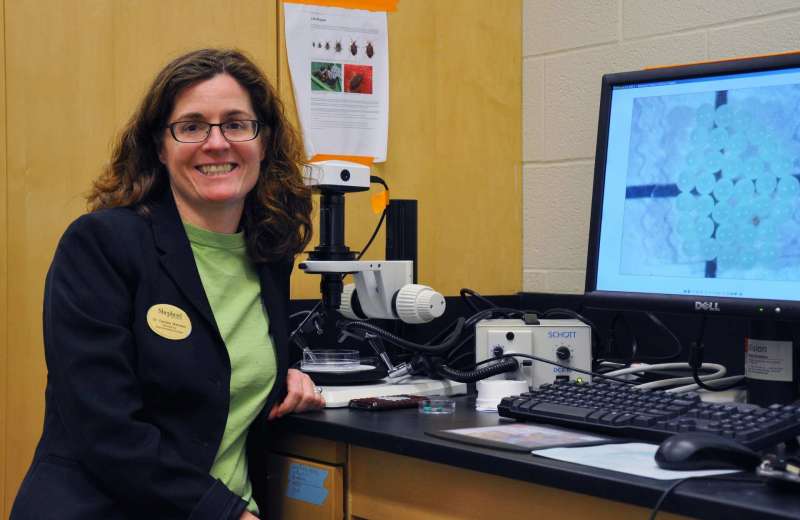 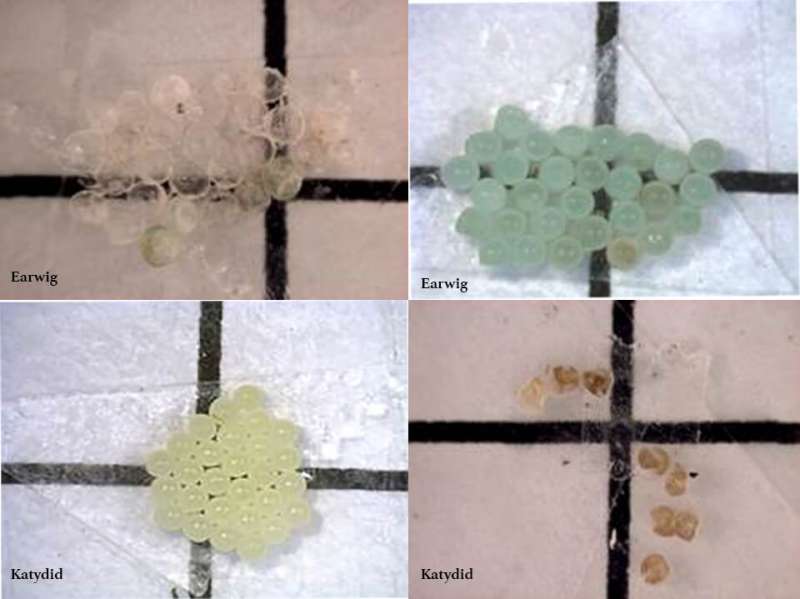