SHEPHERDSTOWN, WV — Physical education students at Shepherd University are learning an unusual game that their professor hopes they will incorporate into their own classrooms when they become teachers. Dr. Jared Androzzi teaches students in his Teaching Net and Wall Games class how to play deck tennis—which was originally played in the early 20th century on military, passenger, and cruise ships and is not well known today.

“I have encountered maybe two or three people who have heard of it and included it in their curriculum,” said Androzzi, associate professor of physical education. “There are a variety of rules because there is no deck tennis governing association. It’s flexible, which is nice because you can adapt the rules to be appropriate in the context of the learning environment.”

According to Androzzi, sailors came up with deck tennis when they had difficulty playing the regular version of the game while at sea because the balls kept bouncing into the ocean. They tied rope into rings and played without racquets, catching and throwing the rings with their hands. Today the rings, which are called coits, are made of rubber. Androzzi first learned about the game when he was student teaching because his cooperating teacher incorporated it into middle school gym class.

“I was pretty impressed with how motivated the students were and how much it prepared them for other striking-with-implement sports, so I decided to adopt it into my PE curriculum when I taught middle school in North Carolina,” Androzzi said. “The students were really receptive to it.”

Androzzi describes deck tennis as a simple version of tennis that can be played in singles, doubles, or Canadian doubles—which is one versus two—using either the tennis or badminton scoring system. Since there is no racket, players can catch and return with either hand. Androzzi said deck tennis is cost effective because the rings aren’t expensive and existing nets for other games can be used. Androzzi enjoys the game and has played it recreationally. About eight years ago, he decided to incorporate it in his class at Shepherd.

“It’s innovative. It’s something new,” he said. “Sometimes students come into a sport that they have played with a preconceived notion about what it is, but when they try this it grabs their attention.”

Deck tennis has certainly proven popular with the students taking the class this semester.

“I actually really like it,” said Alexis Markle, a secondary education major from Inwood who hopes to become a physical education teacher. “It’s my favorite game that I’ve played in college so far. It’s just different. It’s very competitive. I’ve played basketball and volleyball but this just introduces a whole new concept to me. It’s really fun and easy to pick up.”

Like Markle, Richie Adams, a physical education major from Bruceton Mills, had never heard of deck tennis before.

“It’s fun and I am enjoying every minute of it,” Adams said. “Even the history behind it where it was played on naval ships is interesting, especially with my family being a military family. I have a cousin who’s in the Navy. To learn that’s where this came from is really cool to me.”

Adams, who wants to be a physical educator and coach after he graduates, hopes to incorporate deck tennis into the classes he’ll teach.

“I feel like physical education has become really dry. It’s the same thing all the time,” Adams said. “This is definitely something new that I think children would enjoy.”

“When Dr. Androzzi first explained the game, I wasn’t a big fan,” said Spencer Updike, a secondary education major from Martinsburg. “Now that we’re playing it, it’s actually really fun and it gets us moving. It’s different. I’ve never seen or heard of any game like this and it motivates me to participate in the class.”

Androzzi is on a mission to encourage physical educators to teach deck tennis in middle and high school. A few years ago, he did a presentation on the game at a West Virginia Association of Health, Physical, Education, Recreation, and Dance conference. He is also working on an article, “Deck Tennis, a Prerequisite to Net Sports,” that will appear in the January 2020 edition of the Journal of Physical Education, Recreation, and Dance published by SHAPE America-Society of Health and Physical Educators. 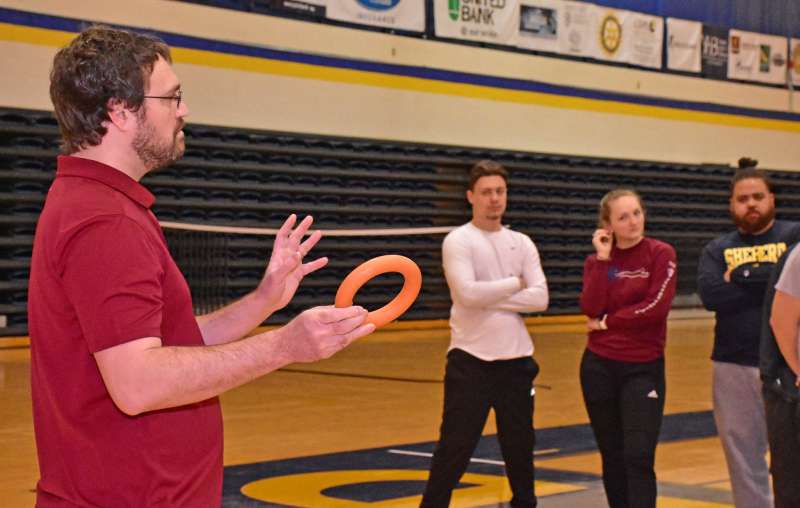 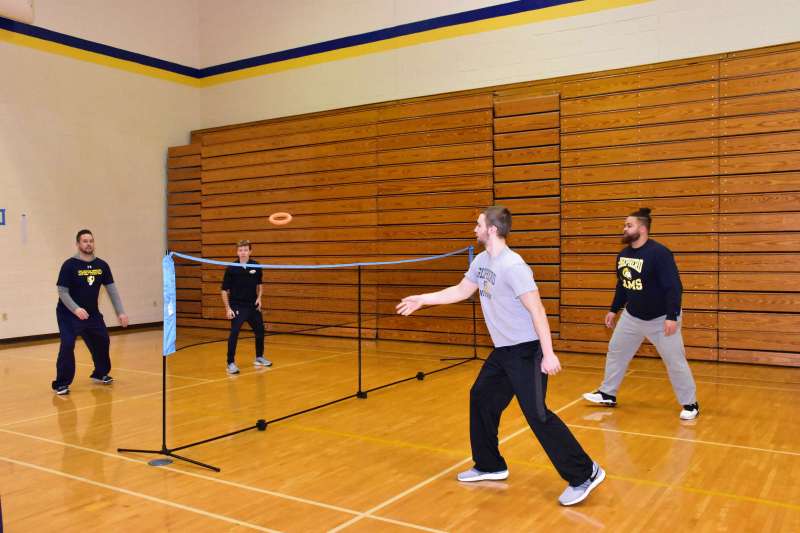