SHEPHERDSTOWN, WV — Dr. Amy DeWitt, associate professor of sociology, has been teaching a unique student for the past few semesters. Since December 2015, DeWitt has been serving as a puppy raiser for Guiding Eyes for the Blind, working with Luther, a 13-month-old black Labrador retriever.

Guiding Eyes for the Blind is located in Yorktown Heights, New York. The organization has provided specially trained dogs to the blind and visually impaired since 1954. DeWitt has wanted to be a part of the Guiding Eyes program since she was a teenager and saw a film about Buddy, the first guide dog in the United States—a German Shepherd that was trained in Switzerland and belonged to Morris Frank.

“I’ve always been fascinated with these service dogs and what they’re able to provide,” she said. “My role in raising the puppy is socialization and teaching good house manners.”

DeWitt had to go through an application process to become a puppy raiser. When Luther was very young, the two of them attended a training class once a week in Purcellville, Virginia. As the pups age, raisers attend classes twice a month. His current training involves introducing Luther to busier environments like malls, airports, grocery stores, restaurants, a college campus, and riding on public transportation so that he becomes relaxed and confident.

Luther learned basic skills like sit, down, heel, stay, and get dressed—which means walking into his vest. He also learned house manners such as not getting on counters or furniture, remaining calm, and that he can only play with his dog toys.

“If he does go to live with someone who’s visually impaired and steals their shoes they can be hours late for work,” DeWitt said. “He has to learn how to greet people politely without jumping on them. That is one of his biggest weaknesses. He’s a very friendly dog and loves saying ‘hi.’”

Luther spends much of the day on Shepherd’s campus. DeWitt takes him for long walks in the morning and afternoon. He goes to class with her sometimes and stays in her office when he’s not in the classroom. Luther accompanies DeWitt to meetings, the library, and the Ram’s Den.

“The Shepherd community has been supportive and patient, sometimes helping me train him,” DeWitt said. “It’s been fantastic. Everyone has been so incredibly supportive. I’m really appreciative of that.”

In early winter Luther will return to New York where he will be evaluated to begin formal guide dog training. If he isn’t meant to become a guide dog, he may be considered for an alternative career in law enforcement, as a detection dog, or with other service dog organizations.

DeWitt has enjoyed being a puppy raiser, but has also found it challenging to attend the once-a-week classes when Luther was younger and to meet all his needs while maintaining her teaching schedule.

“Getting him out in the middle of the night when he was a puppy, getting to class, and making sure I had time in between classes to take him out was a little bit difficult,” she said. “But the rewards are so phenomenal. I really hope he succeeds in the program. Nothing would make me prouder.”

DeWitt said giving Luther back will be difficult. She will be able to keep track of Luther when he goes through the training in New York and possibly after he’s assigned to a visually impaired person, if that person agrees to keep in touch.

“He’s a very, very sweet dog,” she said. “He just loves people and praise. I knew what he was bred to do and I just hope that he succeeds in his career path.”

In that sense, training Luther is not much different from teaching her students at Shepherd.

“You get attached to these students and when they graduate it’s kind of hard to see them move on,” she said. “I want them to succeed and move on to greater paths.”

UPDATE: Dr. DeWitt and Luther were featured in the Tuesday, November 8, 2016 edition of USA TODAY. 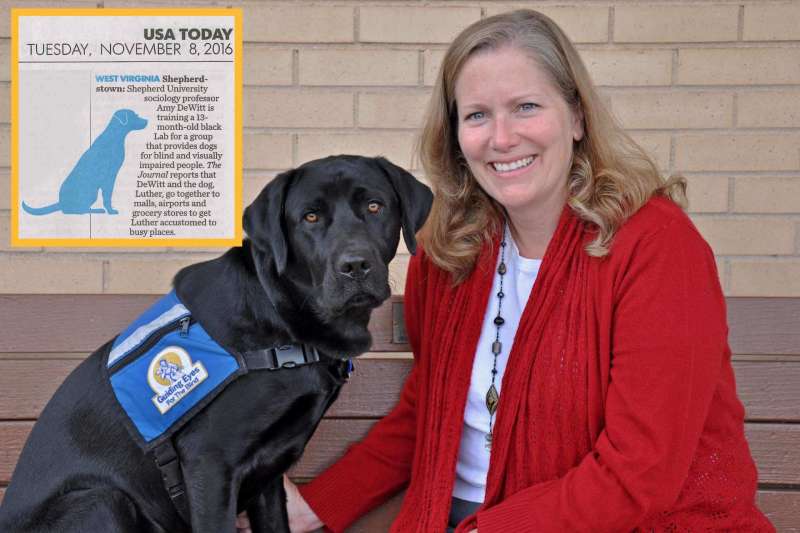