SHEPHERDSTOWN, WV — Classes resumed at Shepherd University this week, and Dr. Amy DeWitt, associate professor of sociology, is working with one unique energetic student who has an extra bounce in his step and a tendency to chew on everything. DeWitt, who gained national attention last school year for her work with a Guiding Eyes for the Blind dog named Luther, has agreed to foster and train a second puppy.

Her new charge, Vosco, is an 11-week-old black Labrador retriever and is a nephew of Luther, who DeWitt was able to see graduate from guide dog school in August. DeWitt said after she returned Luther to Guiding Eyes for the Blind in in Yorktown Heights, New York, in February, he was tested to see if he was a good candidate for guide dog school.

“Luther aced his test and at the beginning of August he was matched with a college student from Arkansas,” DeWitt said. “She’s a junior and she is from Thailand. Luther is now at Hendrix College in Conway, Arkansas, and he is going to London to study abroad in the spring and will probably go to Thailand in a couple of years.”

Luther was paired with 20-year-old student from Bangkok who lost her sight at age 13 when she had surgery on a noncancerous brain tumor. DeWitt worked with Luther for one year and three months. She said being able to see him become a successful guide dog was satisfying.

“I thought I was going to cry the entire time because he was the sweetest dog,” DeWitt said of attending the graduation. “But actually he had such a connection with his new handler that it was just a wonderful experience. I am so happy. It was the perfect match. Luther clearly loves her, and she clearly loves him. I’m just so proud. It was not a sad moment at all.”

DeWitt said Luther knew who she was and greeted her, but when DeWitt left, Luther climbed into his handler’s lap.

“There was clearly a connection there and that’s what really made me choke up a little bit—not from sadness, but from real pride,” she said.

DeWitt credits much of Luther’s success to the experience he had at Shepherd.

“It was because of the Shepherd University campus that he was socialized so well in different buildings with different people,” DeWitt said. “Students loved him. Faculty and staff all helped socialize him and so he succeeded because of that. He got a lot of socialization experience.”

For her part, DeWitt found giving a blind person independence rewarding, so she agreed to train another dog. She said Vosco is much more active than Luther was.

“He’s a really good dog, and I think he has great prospects,” she said. “It’s going to be a challenge but I know with the support of everybody here at Shepherd we’re going to make it work.” 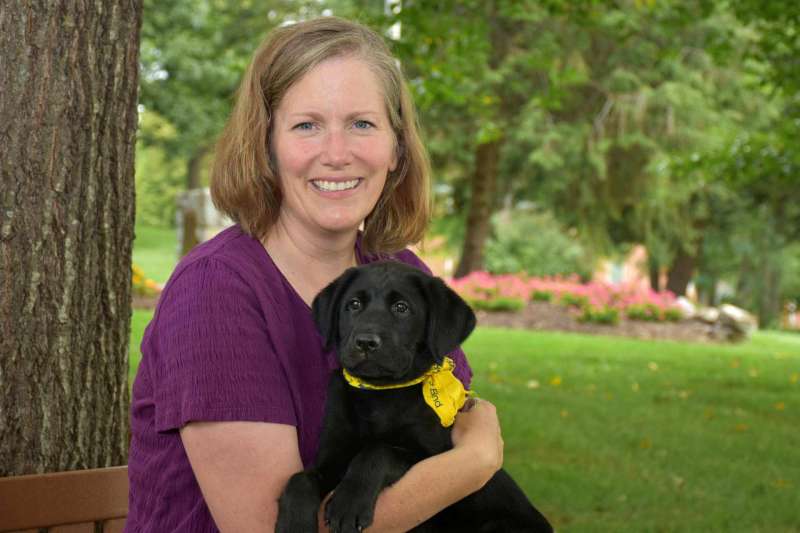