SHEPHERDSTOWN, WV — Shepherd University’s Common Reading has announced upcoming events that relate to the 2014-15 book selection “I Am Malala: The Girl Who Stood Up for Education and Was Shot by the Taliban” by Malala Yousafzai and Christina Lamb.

“I Am Malala” is a true story about a 15-year-old Pakistani girl, Yousafzai, who refused to be silenced and fought for her right to education when the Taliban took control of her village Swat Valley, Pakistan. A Taliban fighter shot her in the head at point-blank range when she was riding the bus home from school. The accident inspired Yousafzai to stand up and fight for girls’ education.

“We are excited about the opportunities the book presents to discuss issues related to women’s rights, right to education, religious fundamentalism, and creating positive social change within one’s own community,” said Shannon Holliday, coordinator for students in transition. “Malala is a global inspiration and very close in age to many Shepherd students, so this common reading will likely resonate strongly with them.”

The film “Charlie Wilson’s War” will be shown on Friday, August 29, at 7 p.m. in Reynold Hall. It is cosponsored by the Shepherdstown Film Society and Shepherd University Foundation’s Scarborough Society. The film showcases the actions of some of the political and military players in the United States and Pakistan during 1980s and gives the historical context of the rise of Taliban terror. The film will be followed by a discussion led by Dr. Ray Smock, director of the Robert C. Byrd Center for Legislative Studies.

Dr. David Gordon, professor of history, will deliver a lecture “Malala’s Pakistan: On the Edge of Two Worlds” on Thursday, September 4, at 12:30 p.m. in the Robert C. Byrd Center for Legislative Studies auditorium. Gordon will introduce the history of Pakistan which lies on the east edge of the Islamic Middle East and the west edge of Indian civilization.

Other Common Reading events include a discussion on women in the Middle East with Dr. Colleen Clemens on Thursday, October 9, at 5 p.m. in the Robert C. Byrd Center for Legislative Studies and a conversation with local residents Fred and Lois Turco who spent years living in Pakistan, on Monday, October 27, at noon in the Student Center Rumsey Room.

Shepherd’s First-Year Experience Taskforce developed the Common Reading Program in November 2007. The program focuses on providing a shared intellectual experience for all first-year students. “I Am Malala” received the highest votes and became the 2014-15 Common Reading after a careful discussion and vote by Shepherd’s students, faculty, staff, and members of the local community. The program is sustained through support from the Shepherd University Foundation.

The film, lecture, and discussions are free and open to the public. For more information visit www.shepherd.edu/commonreading/ or contact Shannon Holliday at 304-876-5461 or shollida@shepherd.edu. 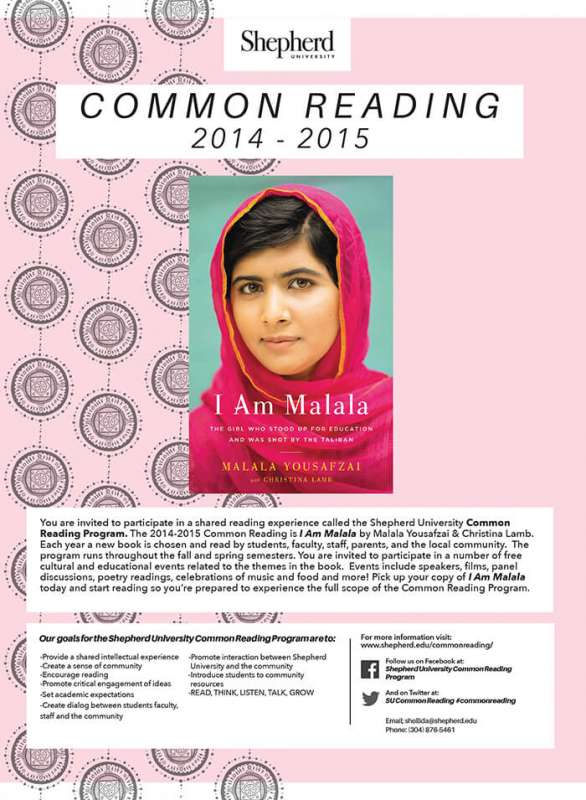