SHEPHERDSTOWN, WV — Fifty years ago, on April 4, 1968, the Rev. Martin Luther King, Jr. was assassinated while he was standing on the balcony of the Lorraine Motel in Memphis, Tennessee. It was an event that had a profound effect on Dr. Geri Crawley-Woods, chair of Shepherd University’s Department of Social Work, who was a 19-year-old student at the University of Rhode Island at the time.

“My family lived in Alexandria, Virginia, and I was coming home with a carload of students,” Crawley-Woods said. “We came down the George Washington Parkway on that night. Dr. King had been killed at 6:01 p.m. (CST) on the 4th. When we looked across the river we could see fires all over the city.”

For Crawley-Woods, King’s death was a call to action.

“I just had this interior experience and sense of horror that someone needed to do something about this level of injustice and violence,” Crawley-Woods said. “A voice came into my mind that said ‘yes, you need to do something about this.’ I took that into my young heart. I went back to the University of Rhode Island; I changed my focus from English literature to sociology and social work, and that set me on the path toward becoming a professional social worker.”

Crawley-Woods hopes a commemorative event on the anniversary of King’s death, Wednesday, April 4, sponsored by the College of Social and Behavioral Sciences, will encourage others to take up King’s campaign for social justice. The National Civil Rights Museum in Memphis, which is housed in the Lorraine Hotel, is encouraging communities across the nation to host commemorations. Shepherd’s event will begin at 4:30 p.m. when the Robert C. Byrd Center for Congressional History and Education will host a 30-minute Academy Award-nominated film that highlights the last hours before King’s death, “The Witness: From the Balcony of Room 306,” followed by a panel discussion.

King was assassinated while standing on the balcony outside room 306 at the Lorraine. Later that evening, he had planned to attend a traditional soul food dinner at a friend’s home in Memphis. The commemorative event at Shepherd will end with a soul food dinner in the Dining Hall, where a facilitator will guide discussion at each table, giving people who are different from one another in terms of age, class, religion, race, and political party a chance to talk.

“I hope it will be a fertile conversation that will bring people together and really honor Dr. King,” Crawley-Woods said. “I believe deeply when someone is martyred the way he was, that thousands of sparks of light go out from that tragic event and they hit people. One of them hit me, and it set me on a path of trying to be an agent of change, to be a force for good like he was in the world. We want to continue that legacy and share that with younger people who do not hold him in their living memory.”

The National Civil Rights Museum has issued a statement asking communities across the country to toll their church bells 39 times “to honor the number of years Dr. King dwelled on this earth and to pay homage to his legacy.” Because the news of his death rippled across the country, bells will chime at various times, beginning at 6:03 p.m. (CST) in Memphis. The Shepherdstown Ministerial Association, under the leadership of the Rev. G.T Schramm, has agreed that the church bells of Shepherdstown will join the carillon bells at Shepherd and will toll 39 times beginning at 7:05 p.m. (EST).

The film and panel discussion are free and open to the public. There is a $9.50 charge for eating in the Dining Hall, but Crawley-Woods said there are funds available for anyone who is not comfortable with this fee. 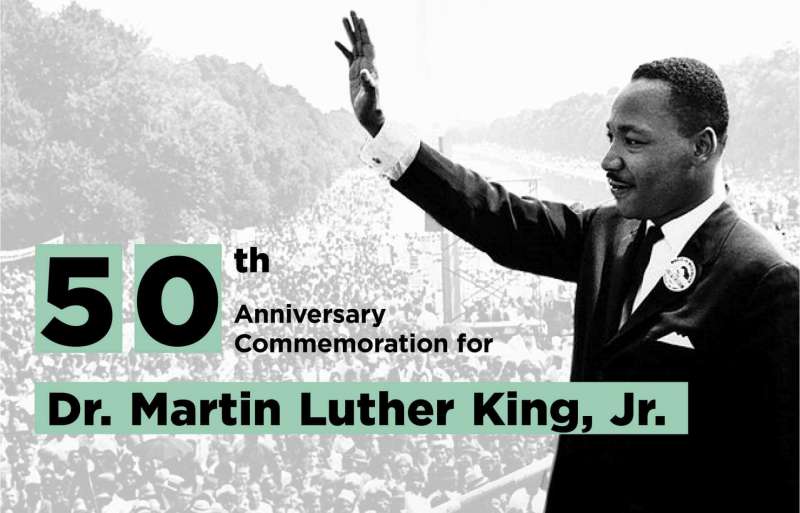 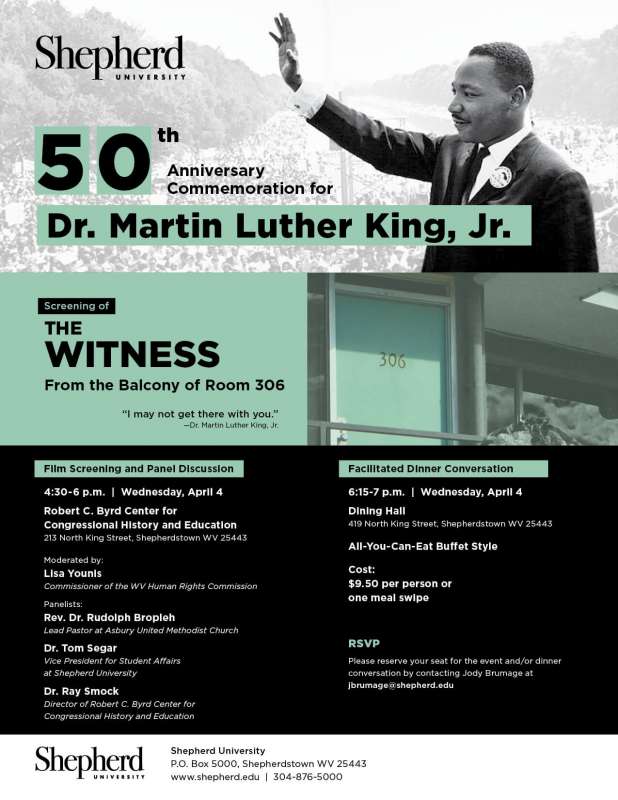