SHEPHERDSTOWN, WV — The author of Shepherd University’s Common Reading book, Jeanne Marie Laskas, will give an author talk/interview on Tuesday, November 5, at 7 p.m. in the Frank Center Theater, followed by a book signing and reception. The Shepherd University Bookstore will sell copies of “Concussion” and audience members can bring their own copies to have signed. The event is free and open to the public.

This year’s Common Reading is Laskas’s New York Times bestseller “Concussion,” which serves as a focal point and provides a common academic experience for all first-year students at Shepherd. The book details how Laskas met forensic pathologist Dr. Bennet Omalu in 2009, while she was working on the article “Game Brain” for GQ magazine. That article inspired her book and the major motion picture “Concussion.”

In 2002, Omalu was working in the Allegheny County morgue in Pittsburgh doing an autopsy on former Pittsburgh Steelers player Mike Webster. Omalu discovered proof that Webster suffered from chronic traumatic encephalopathy (CTE), which causes mental deterioration and is caused by relentless blows to the head. Omalu’s efforts to publicize his findings on CTE met with resistance from the National Football League.

Laskas is the author of eight books, including “To Obama: With Love, Joy, Anger, and Hope.” She is a contributing writer at The New York Times Magazine, a correspondent at GQ, and a two-time National Magazine Award finalist in Feature Writing, most recently for “To Obama With Love, Hate, and Desperation,” the basis for the 2018 book. Her stories have also appeared in The New Yorker, The Atlantic, and Esquire. Laskas’s work has appeared in numerous anthologies, including Best American Magazine Writing 2008 and Best American Sports Writing 2000, 2002, 2008, 2010, and 2012. Her 2007 essay “Underworld” was nominated for a National Magazine Award. Laskas serves as a Distinguished Professor of English and Founding director of the Center for Creativity at the University of Pittsburgh. 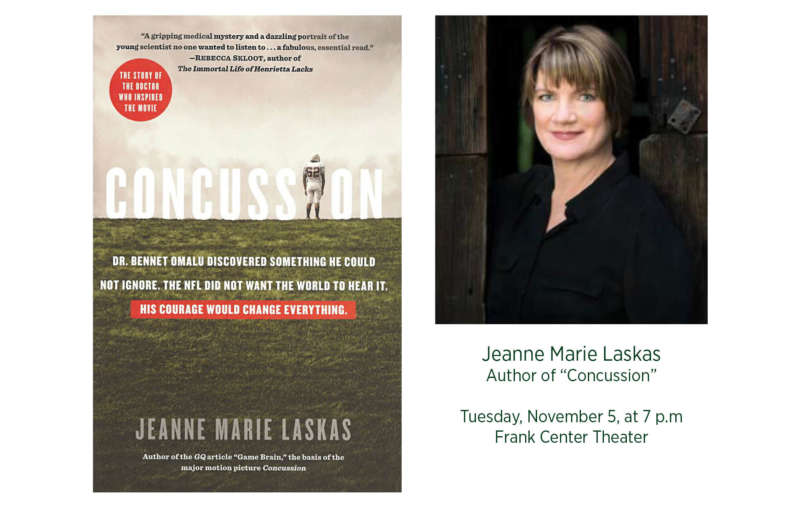