SHEPHERDSTOWN, WV — The chair of Shepherd University’s Department of Contemporary Art and Theater is the focus of a recent ArtVoiceWV—an online video series that profiles artists and explores the creative process behind their work. Rhonda Smith is featured in the October segment discussing her art and demonstrating the printing process in the Center for Contemporary Arts Phase I printmaking studio.

Smith incorporates printmaking and collage into her finished pieces, which she said generally evolve over time.  When ArtVoiceWV producers Jack Kelly and Marla Carr of 78 Degrees West Films of Berkeley Springs shot video in early October, Smith was tasked with demonstrating a part of the process.

“I went into it knowing I was going to pull a print or an image, but the piece I pulled was not going to be finished on that particular day,” Smith said.

The video title is “Journeys and Talismen”—a nod to the influence travel, particularly to Africa, has had on Smith’s work. Four trips to Africa inspired Smith to begin incorporating talismans, objects worn by tribe members that are believed to provide good luck or protect from harm, into her art. Doing the interview for ArtVoiceWV helped Smith recognize a similarity between her travels and the process she uses to create her art.

“The printmaking process I use is one where I have some control, but not total control, and that’s part of the fun of it,” Smith said. “I never really know what it’s going to be like until it’s done, and there’s something adventuresome about it that I really like.”

“You plan a trip, you think you know what’s going to happen, but then you go on the trip and things that you never expected to happen begin to happen and to unfold,” she said. “It’s the adventure of it; it’s the surprise of it that keeps you wanting to do it. That’s the same thing with my artwork.”

Kelly and Carr met Smith at a weekend gallery show in Shepherdstown last summer and, after seeing her work and talking with her, decided she would be a good candidate for a segment.

“During the interview for the program, what impressed me was this tremendous vitality for her work as a teacher and artist,” Kelly said. “I loved the fact that she embraces the unpredictability of creating art.” 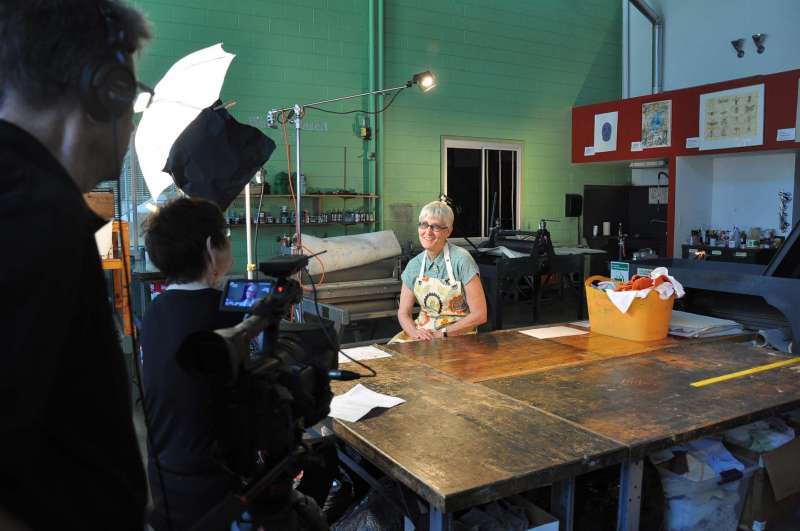