SHEPHERDSTOWN, WV — Fred T. White, senior director of business development at ABS Consulting, will deliver the baccalaureate commencement address during Shepherd University’s 144th Commencement on Saturday, May 6. He will be awarded a Doctor of Business honorary degree during the ceremony.

Baccalaureate commencement speaker Fred T. White has been associated with ABS Consulting since 2009. The firm provides compliance services, optimization of asset performance, and advanced engineering support and management systems for a variety of sectors including marine; offshore; oil, gas and chemical; government; and power. Recent projects include work with the Department of Homeland Security, the U.S. Coast Guard, and Kingdom of Saudi Arabia.

White received an M.S. in instructional technology from Florida State University and a B.S. in management from the U.S. Coast Guard Academy.

White is a member of the Capitol Hill Exchange Club, Maritime Association of South Carolina, Greater Houston Port Bureau, and Applied Business Coalition at Shepherd University where he has been involved in partnering with Shepherd for economic development and innovation.

President’s Award winner Michael A. Smith is the vice president of Valley Proteins, Inc., a family-owned business in Winchester, Virginia, founded by Smith’s grandfather more than 60 years ago. The company’s focus is on creating renewable resources for animal feed and contributing to a cleaner environment by developing clean energy bio fuel.

Smith earned a B.S. degree in business from Shepherd in 1989 and was a member of Tau Kappa Epsilon fraternity, serving as the group’s fundraising chair.

In July 2016, Smith supported Shepherd’s efforts to create a School of Business by issuing a $250,000 challenge grant in support of revitalizing the business program, the first challenge grant at this financial level for Shepherd. The challenge was met by donors and more than $650,000 was raised for the project.

Graduate ceremony speaker Dr. John E. “Quincy” Adams, a resident of Shepherdstown, began his career at Shepherd in 1971 with the position of residence director/admission counselor in Thacher Hall. Over the next 40 years, he assumed several titles including retention specialist, housing director, director of counseling and career services, director of Washington Gateway, assistant and associate dean of student affairs, assistant vice president for student affairs and dean of students, and interim vice president for student affairs. In 2013, he finished his Shepherd career as a University Professor teaching for the College Student Development and Administration program; Teaching, Learning, and Instructional Resources; and the Department of Health, Physical Education, Recreation, and Sport.

His accomplishments during his long career at Shepherd include creating the Career Development Center, acquiring a $570,000 cooperative education federal grant, implementing the Washington Gateway Program, and serving as team writer for the College Student Development and Administration curriculum and proposal. In 2012, he received Shepherd’s Distinguished Graduate Faculty Award, was inducted into Phi Kappa Phi national honor society, and was recognized by the National Career Development Association as a Master Career Counselor for his lifework in career development. Adams was also a founding faculty member in Shepherd’s Master of Arts, College Student Development and Administration degree program, teaching core courses and supervising graduate assistants in the program.

Adams earned a B.A. degree in history in 1971 and a B.A. degree in secondary social studies education in 1973 from Shepherd. He earned his master’s degree in student personnel/counseling from Shippensburg University in 1976 and earned his Ph.D. in educational administration/community college education in 1997 from Virginia Polytechnic Institute and State University. His dissertation, “A Study to Determine the Impact of a Precollege Intervention on Early Adolescent Aspiration and Motivation for College,” was focused on Shepherd’s Junior High Washington Gateway Academy. His research explored the impact of precollege intervention programs on aspiration and motivation in middle school children. 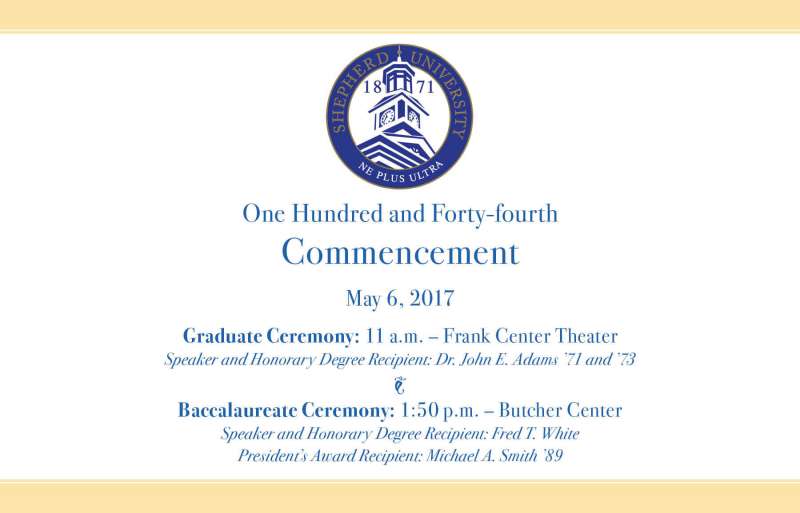