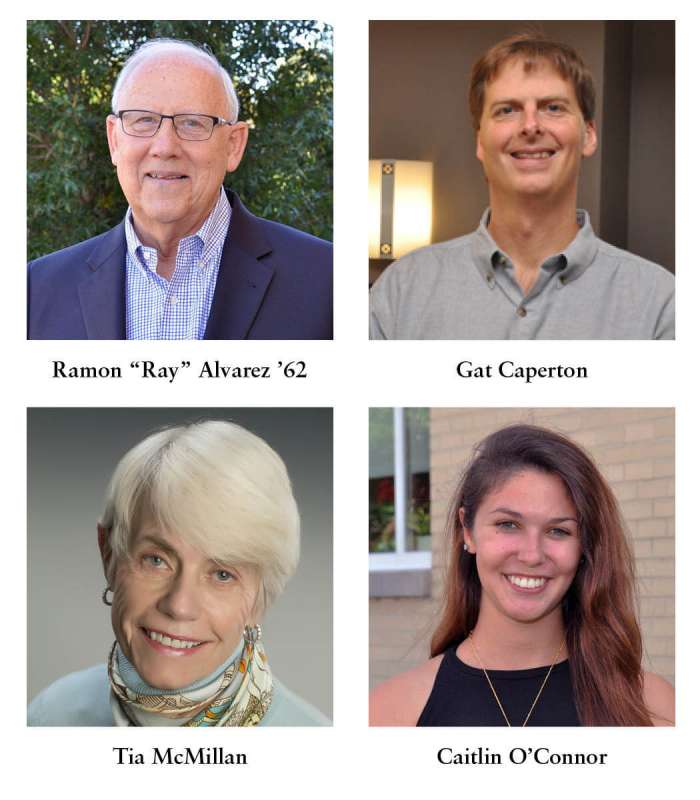 Two new members—Ramon “Ray” Alvarez ’62, of Charles Town, and Gat Caperton, of Berkeley Springs—joined the Shepherd University Board of Governors while a current member—Tia McMillan, of Shepherdstown—was reappointed to an additional term. The three were appointed by Governor Earl Ray Tomblin. Also joining the board was student representative Caitlin O’Connor.

Ray Alvarez has served on the Shepherd University Foundation for the past 11 years—six as its president and three as vice president. He served as vice chair of Shepherd’s first comprehensive fundraising campaign and is currently chairing the Foundation’s and Shepherd’s Business 2020 campaign to raise funds to revitalize the business program. He is also the founding president of Shepherd’s Scarborough Society. He and his wife, Mary, have funded three endowments through the Shepherd University Foundation.

A Shepherd alumnus, class of 1962, Alvarez earned a B.S. in business administration. He spent much of his 40-year career as an executive with Honeywell, Inc. and was vice president, group executive of its Sensing and Control Business Unit. His term will run through June 30, 2020.

Gat Caperton is the president and CEO of Gat Creek, a West Virginia manufacturer of handmade, solid-wood home furniture that he acquired in 1996. Prior to acquiring the company, Caperton worked six years in Chicago for a large, diversified manufacturing company. While working full time, he earned an M.B.A. from the University of Chicago Graduate School of Business. In 1990, Caperton received a B.A. in economics from Davidson College.

Tia McMillan is an owner, along with her husband, Bob, a former Board of Governors member and chair, of Jefferson Distributing Co., a beverage distribution business in Martinsburg. The McMillans were the recipients of Shepherd’s President’s Award in 2011, which is given annually in recognition of exemplary service to Shepherd University and the community.

A graduate of Sweet Briar College, she is a founding member of the Contemporary American Theater Festival (CATF), serving on its board of trustees from 1991 to 1997, and is now an honorary board member. She and her husband sponsor the McMillan Family Scholarship through the Shepherd University Foundation, which is awarded annually to a theater student, and have recently established the McMillan Family International Initiative. McMillan was named a Woman of Distinction in 2006 by the regional council of Girl Scouts and was named Berkeley County Citizen of the Year in 2007 by the Martinsburg/Berkeley County Chamber of Commerce. Her term will end June 30, 2020.

Caitlin O’Connor, a senior nursing major from Baltimore, Maryland, is the president of Shepherd’s Student Government Association. She served in two other Student Government Association executive board roles between 2014 and 2016, and began her SGA involvement as a senator during her first year at Shepherd. O’Connor was a member of the Presidential Search Committee in 2015. Her career goal is to work in a trauma unit.