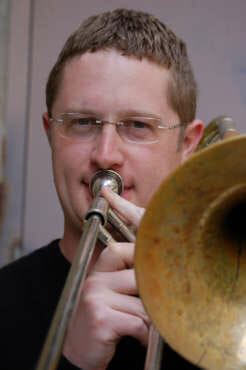 Euan Edmonds is a professional freelance trombonist currently residing in the Washington, DC and Balitmore area.  He is a graduate of Shepherd University, where he studied trombone with Dr. Frank Gazda and Dr. Natalie Mannix, and jazz with Fred Hughes, Tom Williams, and Frank Russo.  He earned his Master’s and Doctorate degrees from the University of Illinois where he studied trombone, composition and arranging, and jazz studies with Jim Pugh and Chip McNeill.

He has performed with a wide variety of groups and ensembles such as The Temptations, The Glenn Miller Orchestra, on the national tour of the 2008 revival of the Broadway musical, “The Pajama Game” and at venues and clubs across the world from Club Zinco in Mexico City, to The Venetian in Macau, China and at the prestigious Chicago Jazz Festival.

Prior to returning to the east coast Dr. Edmonds spent the majority of his career living in Chicago, Illinois where he worked as a freelance trombonist playing in all styles of music imaginable, while also actively participating in Chicago’s vibrant creative music and jazz music scenes.  Most recently he can be heard on the recordings: Tri-Colored Eyes by Clark Gibson (2019), Liminality by Eric Skov (2019), and Desafîo Candente by Gustavo Cortiñas (2021).