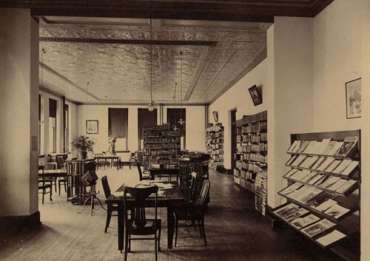 The library has been an integral part of Shepherd University since its founding in 1871. The library was first housed in a shared classroom in McMurran Hall. In the Spring of 1904, the library was moved by students and faculty to the first floor of the newly constructed Knutti Hall. The library was operated by faculty members until 1924 when the first librarian, Miss Stewart E. Arnold (1924-1950) was hired.

A much needed library addition was realized in August 2002 with the completion of an 80,000 square foot building. The library now shares the addition with the Robert C. Byrd Center For Congressional History and Education, a private, nonpartisan, nonprofit educational organization whose mission is to promote a better understand of the U.S. Congress. The additon was followed by a renovation of the original 1965 building. October 2003 saw the re-dedication of the renovated library.