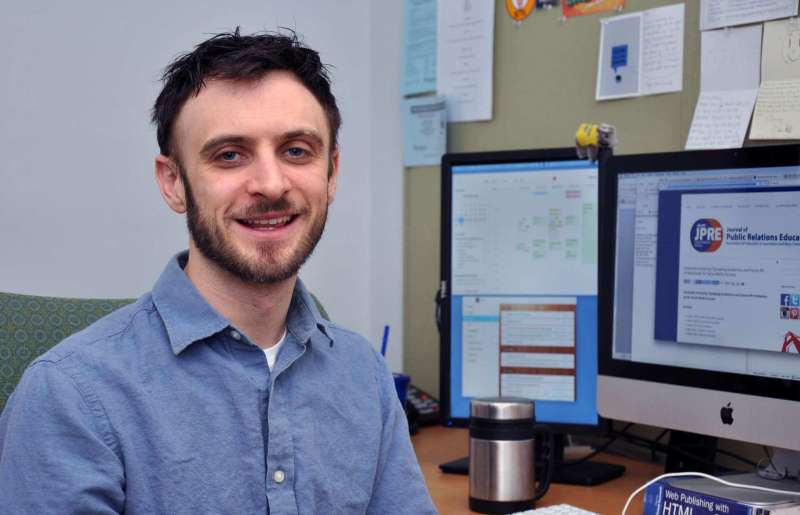 Dr. Matt Kushin, associate professor of mass communications, gave a talk titled “The Cost of Clicks and Shares: Questions on the Civic and Political Potential of the Internet in the Attention Economy” at the University of Aveiro in Portugal for Internet Day 2018 on May 17.

Kushin, whose research focuses on social media, politics, and civic life, presented information about the impact of social media on society.

“The larger question that I put to the audience was, ‘what Internet do we want to have over the next 25 to 30 years?’” Kushin said. “I also talked a bit about how we got to where we are and what some of the ramifications are.”

During his speech, Kushin explained that experiments are running constantly on social media to determine what will attract attention. Major companies and others are frequently testing by creating articles with five or six different headlines to see which will get a click.

“It is my opinion—and my argument—that these experiments are happening at a pace that has never before happened, that so much data and knowledge are out there that we can be persuaded in ways that we were never being persuaded before,” Kushin told his audience.

Kushin addressed several issues, including whether society thrives when ruled by emotional outrage, a lack of compromise, and polarization, and whether people stop, think, and evaluate the evidence to come up with informed decisions.

Kushin also discussed the echo chamber, where people tend to follow others who are like-minded and not question or fact check information.

In addition to the University of Aveiro, Kushin spoke at the New University of Lisbon. The American Corners Program through the United States Embassy and Consulate in Portugal sponsored Kushin’s visit.

“It was a life-changing experience for me to have an opportunity to interact with the faculty, the students, and the culture,” Kushin said. “More than anything, it showed me the common interest and drive for applying communication to solve real-world problems on an international scale.”

Kushin hopes the experience will help him encourage the students in his classes at Shepherd to think about how people are trying to address problems across cultures and throughout the world.