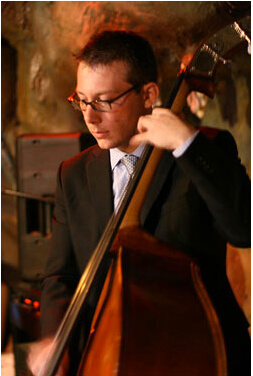 A winner of the Louis Armstrong Jazz Award, bassist Kevin Pace is gaining the attention of the straight-ahead jazz scene. He has performed with musicians such as Gretchen Parlato, David “Fathead” Newman, Jon Metzger, Freddie Redd, Jon Ozment, Steve Fidyk, Steve Abshire, John Jensen, and Greg Hyslop, a four-star recording artist in Downbeat Magazine. Pace has toured throughout Germany and Austria as well as in his own area, including everal spots at the East Coast Jazz Festival, where he returned as an assistant clinician for the 2002 festival and as a member of the Adam Janjigian Quartet in 2004 and 2005.

A student of Jon Metzger, Tom Baldwin, and Charles Gambetta, Pace has an explosive, earthy, solid style that can be heard on several recordings. He is also active as a composer and arranger. Among other projects, Pace has completed the soundtrack for Elon University’s Global Studies CD-Rom (Carpe Viam Press, 2001) and “How To Carve A Pumpkin” (Beardog Productions, 2004), an independent film by Rady Large.

As well as being an active jazz musician Pace has become one of Maryland and central North Carolina’s most reliable freelancing bassists performing in the orchestra of the Long Leaf Opera Company of Durham North Carolina and in pit orchestras for musicals such as “Urinetown”, “A Chorus Line”, “The Music Man”, “Company”, and over thirty more throughout the East Coast. Pace earned his B.A. in music from Elon College and has completed a MM in jazz performance at the University of Maryland.